Engage with this Initiative

Thank you for your interest in collaborating with a Policy Initiative listed on APFx. Please allow us 3-5 days to process your request or write to policy@avpn.asia with the subject header ‘APFx – Engagement Opportunities’ for more information.

West Java remains one of the two regions most affected by the coronavirus pandemic in Indonesia. In 2017, West Java still has 8.71 percent of their population living under the poverty line. Today, this income divide has led to limited and unequal access to COVID-19 testing.

To manage the spread of the virus and strain on the healthcare system in West Java, the province is open to vital donations such as:

Innovation play an important role during crises. West Java is open to various COVID-related pilot projects and runs to take place in the province. They are also keen to collaborate and share data to produce various types of pandemic analysis.

West Java would like to support innovation and technology to help in the fight against COVID-19.

The West Java Provincial Government invites the AVPN community to be an outreach partner to spread and promote West Java’s strategy to fight against COVID-19 to engage more partners in this relief effort.

Apart from Jakarta, West Java is the next region hardest hit by the COVID-19 pandemic. While the central government has been updating its numbers on confirmed cases, provincial governors have suggested that numbers are significantly higher than the official count.

Due to the decentralized governance system in Indonesia, regions and provinces like West Java are impacted by the hindered public policy implementation and the lack of delivery of government services.

To fight the COVID-19 crisis, the Governor of West Java has proactively undertaken the following initiatives: 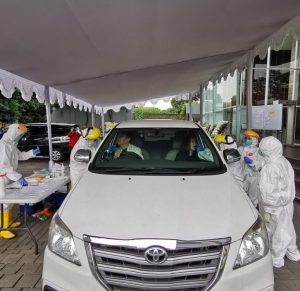 To bypass the slow testing process, West Java has obtained test kits and equipment independently from South Korea. They have also established its very first laboratory test for COVID-19 and drive-through testing stations to increase access to COVID-19 tests.

These proactive measures have allowed the province to distribute many rapid test kits which have helped health officials identify several infectious clusters in West Java.

West Java provides real time and actual data on the new cases, test numbers, recovering patients and death numbers transparently through their COVID-19 website and apps named PIKOBAR. PIKOBAR seeks to weed out fake news and allow users to conduct a preliminary self-diagnosis through the app to find out if they should get tested.