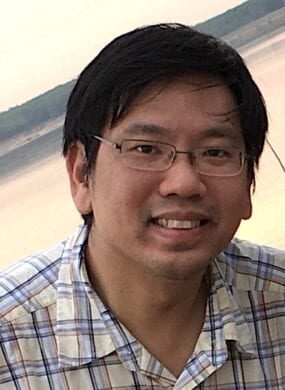 Apinun Tunpan is a researcher turned entrepreneur who currently serves as Chief Technology Officer and Founder of the SMART Sense Industrial Design Co.,Ltd. (SMART-Sense) based in Bangkok, Thailand. He also serves as Research Consultant for the Internet Education and Research Laboratory (intERLab) at the Asian Institute of Technology (AIT), located in Pathumthani province, Thailand.

In 2009, Apinun joined intERLab, AIT, as Senior Research Specialist and conducted his research in the areas of Mobile Ad hoc Networks (MANET), Vehicular Ad hoc Networks (VANET), and Self-Configuring Self-Healing Disaster Emergency Communication Networks. From 2013 to 2015, through the grants from the THNIC Foundation, and in 2014 through an ISIF Asia grant from the APNIC Foundation, Apinun was one of intERLab’s key persons in the research and development of Community Wireless Mesh Networks (CWMN) technology targeting at ICT for Development (ICT4D). His team’s CWMN prototypes were gradually tested and evolved in a small number of rural villages and rural schools in Thailand. He focused his CWMN research on making it easy-to-use, low-cost, and low-powered. Some major goals were to create simple and affordable wireless Internet mesh “routers” that allow rural citizens to get connected and to get involved in sustaining their CWMN deployments. IntERLab’s team was able to get a few interested rural villagers to help maintain and sustain the CWMN by turning some of them to a small group of “rural networking engineers and entrepreneurs.”

In December 2014, intERLab was supported by the Network Startup Resource Center (NSRC), USA, and the T/ICT4D Lab at International Centre for Theoretical Physics (ICTP), Italy. NSRC and T/ICT4D ICTP’s researchers came to train intERLab’s team on the Internet of Things (IoT) and Wireless Sensor Networks (WSN) technologies. IoT and WSN prototypes were built and deployed within AIT’s main campus in Pathumthani province, Thailand.

In December 2015, Apinun founded the SMART Sense Industrial Design Co.,Ltd. with a business partner and a seed investor from the Thai Industrial Sector. SMART-Sense currently is a Technology Startup company, endorsed by the Thailand Board of Investment (BOI) in the “high value added software” category, focusing on the design and realization of the Internet of Things (IoT) software and solutions for the Industrial Sectors. SMART-Sense now has a number of referenced large corporate customers and is expected to expand its IoT solution business rapidly in the coming years.

In this 2017 “SMART Rural Schools” initiative, Apinun’s company, SMART-Sense, has teamed up with intERLab in a joint ICT and IoT for development (ICT/IoT4D) mission to bring IoT and WSN technologies into the hands of rural communities. We seek Venture Philanthropist’s support to bridge the Digital Divide gap between rural and urban communities. We plan to directly transfer technological knowledge to interested and contracted high-school rural students first in a small number of selected rural schools, and then to the rural communities around those students. Armed with our unique combination of CWMN and Industrial IoT expertise, we will devise proper IoT tools and do-by examples to teach participating rural students as well as to allow them to develop rural IoT business within their rural communities. We will then subsequently scale our efforts to other rural regions. We will acknowledge our Venture Philanthropist (VP) on our rural community IoT solutions as well as can do revenue sharing or co-ownership with our VP.

Apinun Tunpan earned his Ph.D. and M.S. degrees in Computer Science from the University of Maryland College Park, USA, respectively in 2002 and 1997. He earned his B.Eng. in Computer Engineering from Chulalongkorn University, Bangkok, in 1993.