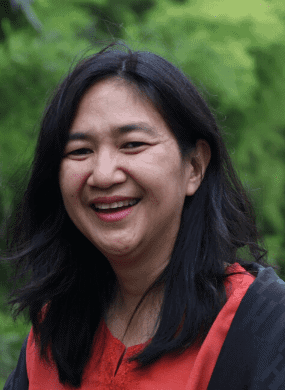 Ms. Albandjar is currently the Chief Communication Officer of DANA one of Indonesia’s leading digital wallet startups. She also serves as Board of Commissioner of Kimia Farma, Indonesia Pharmaceutical State Owned Enterprise. In the Public Sector, Ms. Albandjar was the Special Advisor to the Chief of Staff of the President of the Republic of Indonesia, and served as the Expert Advisor to the Commission I DPR RI responsible for Information Communications, Foreign Affairs, Inteligence and Military Policy. In the private sector, she held the role of Market Access, Public Affairs and Policy Director for several Multinational Companies such as as Merck Sharp & Dohme (MSD) Indonesia, Pfizer and Microsoft, in addition of years working in broadcasting and telecommunication companies.

Ms Albandjar graduated from Airlangga University Surabaya Indonesia and received her bachelor degree in International Relations at the Social & Political Science Department. She is also the recipient of the Fulbright Scholarship, acquiring her Masters of Arts (in Electronic Media) from the San Francisco State University where she received the university’s highest award as the outstanding graduate student; in addition to acquiring Master of Business Administration from the Prasetiya Mulya Business School – Jakarta. Currently she is pursuing her Doctorate Degree in Business Administration at Pelita Harapan University, Jakarta.

Ms. Albandjar carries with her more than 25 years of Information and Communication experience, in Journalism, Management and Public Policy. After returning from the US, she is heavily involved in the telecommunication industry in the rural areas and ICT issues especially regarding digital divide issues. Her expertise in information, communications, information technology policies made her a frequent speaker at forums related to her field. She held several organization positions including Executive Committe for Indonesia Chamber of Commerce; and several youth social movement non profit organizations in the area of building capacity and enabling youths, and also animal welfare. As a professional, Ms. Albandjar visions re-position the paradigm of politics and economy in Indonesia to that of a professional stature.