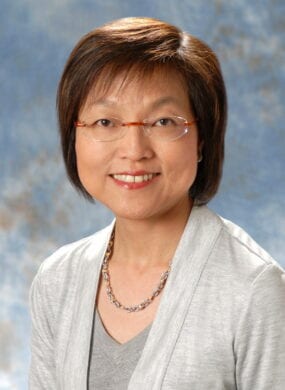 Dr. Lily Lee is the President of Almata, a start-up social business with the mission to improve public health through technological innovation. Almata partners with private and public organizations to design, launch and sustain large-scale technology-led global public health solutions.

Almata is inspired by the international Declaration of Alma Ata which affirmed health as a fundamental human right, emphasized community-based, education and prevention focused primary care, and called for collaboration between the public and private sectors. Lily will lead Almata to advance the goal of improving public health through the innovative use of information technology.

Lily was a senior executive with close to 30 years of international experience in the pharmaceutical industry in the United States, Europe, and Asia Pacific. Concurrently, Lily has over 25 years of leadership role in non-profit organizations specializing in rural development in China, and continues to serve on the Board of The Zigen Fund.

Lily had worked with large multi-national companies for seventeen years (Janssen, Johnson & Johnson, and Ciba Geigy [now Novartis]), and with two small biotechs for twelve years. Lily was responsible for drug development and approvals in the USA, Europe and Asia. Over the years, Lily expanded her responsibility to lead all R&D functions in the drug development process -- regulatory affairs, biostatistics, clinical research, quality assurance, and preclinical. In her latest position in the Pharmaceutical industry, Lily was Senior Vice President and Head of Asia Pharmaceutical R&D for Johnson & Johnson, responsible for initiating and building all R&D functions in Asia Pacific over a seven year period until 2012.

Lily is passionate in building high performing teams, and enjoys mentoring and empowering teams to excel. She and her teams have been responsible for the approval and launch of several life saving products in the US, EU and Asia in areas of cancer (breast cancer, colorectal cancer, and head and neck cancer), and invasive fungal infections.

Concurrently, since 1990, Lily has been an active Board member, President and Chairperson of a non-profit organization, The Zigen Fund. Zigen (滋根), which in Chinese means “to nurture the roots”, is a US registered non-profit organization founded in 1988. In 1995, Zigen became the first few fully registered NGOs in China. Zigen has sustained and expanded active programs in ten provinces in China, with focus on basic education, women’s empowerment, basic health care, environmental improvements, and migrant worker communities.

Since 2013, Lily is an Adjunct Professor at the University of Pennsylvania with primary interest in fostering a holistic understanding of the complexity of global challenges, and exploring win-win solutions through the examination of the interface among the government, business and non-profit sectors.

Lily holds a Ph.D. in Demography and an MA in Biostatistics (School of Public Health) from the University of California, Berkeley, and a B.A. in Statistics from University of Minnesota, Minneapolis.