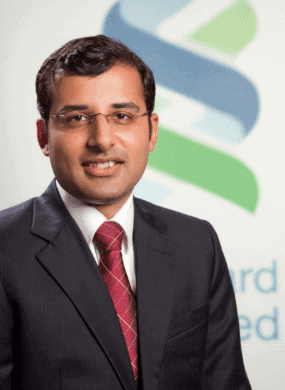 Manpreet Gill is Head of Fixed Income, Currencies & Commodities (FICC) Investment Strategy at Standard Chartered Bank. He is a key member of the Bank’s Group Investment Council and also acts as an advisor to the Discretionary Portfolio Management division.

Manpreet has significant experience in financial markets: his previous roles have included Asia Strategist at Barclays Wealth in Singapore and G10 FX Strategist at ICICI Bank in India. He holds an MBA from INSEAD, a MA in Economics from the Delhi School of Economics and a BA in Economics
from St. Stephen’s College.

Manpreet’s views are widely sought by both clients and the media. He frequently appears on CNBC, Bloomberg as well as local TV stations across the region and regularly contributes articles to the region’s newspapers and magazines.

While Manpreet is now based in Singapore, he has previously lived in a number of countries in Asia, Middle-East, Africa and Europe. He is an ardent motorsport fan.