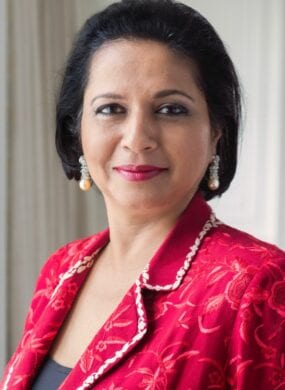 A prominent business woman, Priya Paul is the creative powerhouse behind India’s leading collection of contemporary luxury boutique hotels – THE Park Hotels and the new social catalyst brand – Zone by The Park. Under her direction, THE Park Hotels have emerged as stylish, edgy, warm and fun –a true reflection of her personality and her passion for modern art and design.

Priya Paul is an Executive Committee Member of the Hotel Association of India (HAI) and also served as its President from 2005 till 2009. She is a founding member of the World Travel and Tourism Council – India Initiative and has served as the Chairperson for the year 2013. She is also a Board Member & Co-Founder of South Asia Women’s Foundation (SAWF-IN) and Board Member, Breakthrough India. She serves on a multitude of arts and philanthropic advisory boards.

Priya Paul has a BA in Economics from Wellesley College and has completed the Owner President Management Program at Harvard Business School.

In 2012, Priya Paul was awarded the Padma Shri, India's fourth highest civilian honour, for her services to Trade & Industry by the President of India. She has also been conferred with the Insignia of Chevalier de l’Ordre National du Merite (National Order of Merit) in 2014 for her significant contributions.