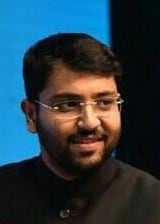 He holds a bachelor degree in History from St. Stephens College, New Delhi, with masters in International Affairs from Jawaharlal Nehru University, New Delhi. He was also selected for the prestigious CRISP fellowship in 2015 funded by UK Foreign and Commonwealth Office.

He has been awarded twice for his stellar performance in Swaccha Bharat Abhiyan and once by the Election Commission of India for his pioneering role in supervising elections. He has also been felicitated by the Prime Minister for his leadership in catalysing Indiaâ€™s shift towards Digital Transactions.

Mahimapat is passionate about good governance and the development of the country.