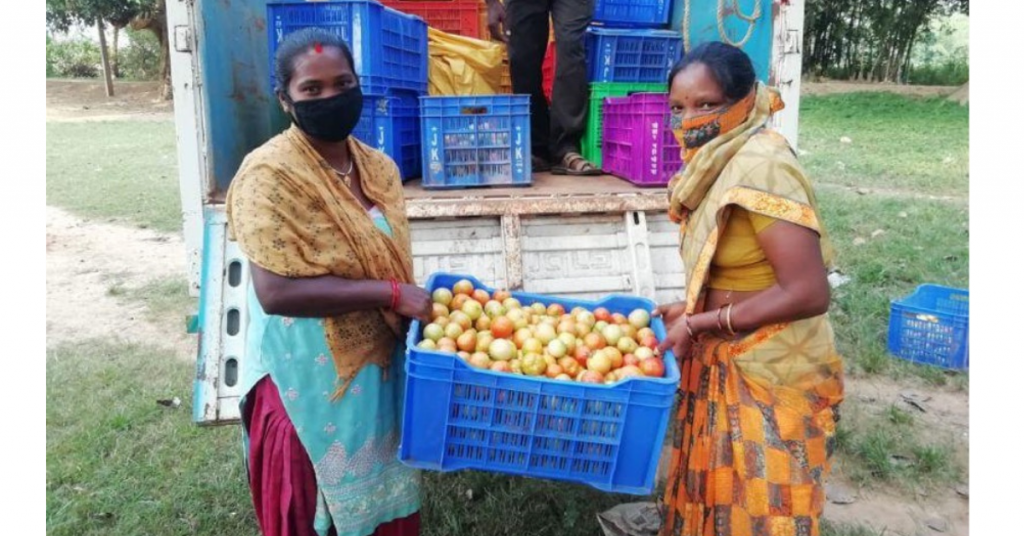 The COVID-19 experience has removed any doubts about how inextricably countries, communities and societies are linked. It has also clearly highlighted that while responding to crises and providing relief during such global pandemics is critical, what is even more important is building resilient societies and communities that can weather such storms in future.

We, in PRADAN, have been working with communities in remote, rural parts of Central and Eastern India to help build sustainable livelihoods among the poor and marginalised and ensure that they can emerge from intergenerational poverty. While there has been significant disruption in their livelihoods, what has been extremely encouraging is communities’ willingness and ability to ride the storm. It will be pertinent to mention here that agriculture has been the only sector that has witnessed positive growth in the last financial year.

For India’s smallholder farmers, dealing with the second wave of COVID-19 implies more self-contained production system at local level; reduced individual efforts in input provisioning and output marketing; extensive use of digital platform and penetration of such services into the remote tribal belts; and de-risking production system of these small holders. These specifically translate into ensuring access to better farm inputs, enhanced soil quality and a market for fair price of their harvested crops have become more important than ever before.

India’s smallholder farming: Key challenges and how to overcome them

Despite being the backbone of subsistence farming, women remain invisible as equal stakeholders in agriculture. Hence, to be recognised as farmers, owners, and decision makers, and build their stake in agriculture, we need to build an ecosystem around them. Trained professionals have a role to play in guiding marginalised farmers in adopting new crops, commodities and horticulture to create more value in their farming practices.

It is crucial to instil confidence among women so that they can embark on commercial agriculture. Different capacity building initiatives and support mechanisms facilitate the transformation of non-producers into producers before turning them into proficient producers. Not only would the whole process of transiting from (paddy) mono-crop based subsistence agriculture to diversified commercial agriculture take time, but it also requires this ecosystem of support as it contains higher risk. Even though it is a little risky proposition, it promises more remuneration than what subsistence agriculture can offer. A strong insurance support, during the initial years of transition from mono-crop to cash intensive multi-crop, would be nonetheless extremely beneficial for these smallholder women farmers.

“It is not easy for us [women] to go to the market and sell our produce. If the markets are developed in every village, it would be easier to sell,” said Jormani, a smallholder farmer from Chirugora village of West Bengal.

A major task here would be to prepare smallholder farmers to adopt diversified agriculture by creating farm-assets like irrigation. By virtue of steady irrigation in their crop-fields, farmers will be able to grow a wider range of commercially lucrative crops. The next step is facilitating a direct linkage with market and primary smallholder producers, and creating conditions on the ground (scale, aggregation, product quality etc.) to attract formal markets to favour these farmers.

We also have to help set up farmer producer organisations (FPOs), which will be acting as a pivot in this entire initiative. The registered FPOs are unlocking the potential of small holdings by collectivising vegetable, goat and backyard poultry farmers, particularly those led by women. This leads to the institutionalisation of production and marketing support services, which guarantees better market connect. On one hand, the FPOs ensure that the market has a certain volume of produce by increasing cropping intensity at the farms, and they also ensure that farmers have different inputs and services support, including farm-assets. Therefore, they work on an assurance model which is key to the adoption of better technology to attract more investment, thereby leading to a shift from mono-crop cultivation to the adoption of diversified cropping.

A significant initiative in this direction has been the launch of a project called “LEAP – Livelihoods Enhancement through market Access and women emPowerment”. PRADAN entered into a partnership with the Walmart Foundation for this project which aims to impact the lives and livelihoods of 45,000 smallholder women farmers across the states of Jharkhand, Odisha and West Bengal in India, which has a population of about 225,000 people. LEAP will help them recover from the aftermath of the lockdown. About 70% of these target communities come from indigenous communities – also known as the Scheduled Tribes (ST) and Scheduled Caste (SC) communities – while the remaining come from the Other Backward Classes (OBC).

Over the last nine months of implementation of project LEAP, 11 FPOs have been registered and their impact is quite visible:

“We sold the tomatoes, a winner crop for the area, at doorsteps at Rs 10.5per Kg, while those who were not part of the producer group sold their produce at Rs 7-8per Kg,” said Saraswati from Hatinada village in Purulia of West Bengal. This highlights how preparing smallholder farmers with assets and marketing assurance can make an impact on their livelihoods and the economy.

Hence, to make the smallholder farmers successful, it is of prime importance to organise them and synchronise their cropping pattern as per the market need with more efficient agricultural practices. Organising about 1000 to 1500 farmers into FPOs or similar collectives along with adequate farm assetisation can lead to substantial increase in production and an increase in their income. Donors need to support this, either by funding the entire package of practice, or by supporting key points of intervention, such as market linkage facilities or making inputs available at farmers’ doorsteps.

The implementation of LEAP is helping smallholder women farmers benefit from these interventions. The farmers are able to reduce their production costs due to ‘economies of scale’, by virtue of collectivised farming with reduced input cost and easier and assured marketing. We need more such initiatives that focus on empowering women smallholder farmers to build back stronger in a post-pandemic world. For more information, write to souparno@pradan.net.

Greening the Internet: Collaborating for a Sustainable Digital Future