Last month EVPA, the European sister organisation to AVPN, launched The State of Venture Philanthropy and Social Investment (VP/SI) in Europe | The EVPA Survey 2015/2016, our industry survey taking the pulse of the Venture Philanthropy and Social Investment (VP/SI) sector in Europe. The report provides key data to help benchmark organisations, and helps those interested in social impact first approaches get up to speed.  The survey polled social investors and grant makers based in Europe, of which 69% seek a societal return over a financial one, and 31% consider societal and financial return equally important.

Below we highlight 7 interesting findings and trends for the European VP/SI sector. All figures refer to Fiscal Year (FY) 2015 unless otherwise stated.

Over €6.5 billion was invested by the respondents since they started their VP/SI activities (a 30% increase compared to FY 2013). The surveyed organisations allocated an average of €7.8 million through the VP/SI approach.

2.  Venture Philanthropy Organisations (VPOsS) invest in a wide range of geographies across a large number of sectors

The surveyed VPOs primarily invested in Western Europe. Asia received 6% of the total investment. The most commonly targeted social impact themes are economic and social development, ahead of financial inclusion, education, environment and health. Altogether, the top 5 sectors made up for 79% of the total spend. 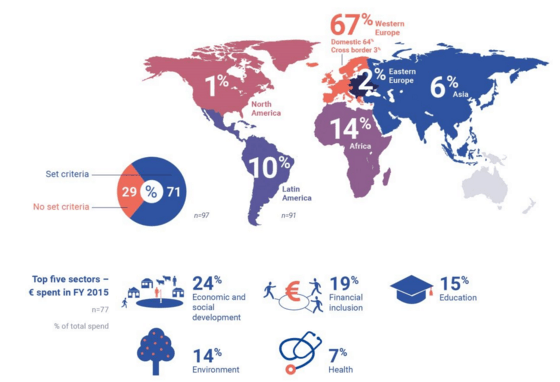 Co-investment with peers (VPOs or societal impact first investors)  saw a big increase. A large majority  of respondents have co-invested in the past and a fifth said they are interested in doing so, even if they have not co-invested yet.

4.  VP/SI organisations have no shortage in investment opportunities and are improving their deal screening process

Respondents screened 7,520 potential opportunities. On average, each VPO screened 86 organisations, did further due diligence on 17 of them and selected 9 investees.

5.  Tailored financing is a reality for European VPOs

The vast majority of surveyed VPOs adapt their financing model to the needs of the investees, with about 60% of respondents always or often doing so.

6.  VPOs support their investees not just financially, but also with a variety of non-financial support  (NFS)

Most commonly offered NFS  is strategic support and assistance with revenue strategy, followed by financial management.

96% of VPOs surveyed indicated to measure the societal performance of their beneficiaries/investees, of which the majority do so once or twice per year during the investment period. 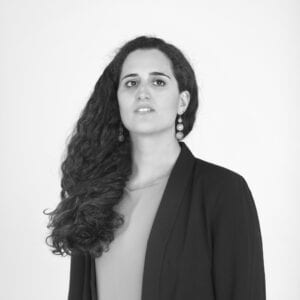 Alessia is Research Manager at the European Venture Philanthropy Association (EVPA) in Brussels. She has previously worked at EVPA as Research and Policy Analyst and as Project Analyst and she re-joined the organisation in August 2016. From March until July 2016, she was trainee at the European Commission, DG ECFIN Unit L2 – Financing of competitiveness, innovation and employment policies. Alessia formerly worked as an intern for the Italian Chamber of Commerce in Paris and for Unioncamere Piemonte in Brussels. From 2008 until 2015, she has been member of SeiPiù, a non-profit organisation based in a disadvantaged area of Turin, collaborating with them as Project Manager in 2013 and 2014. She has ten years’ volunteering experience in the NGOs’ field and a strong interest in managing societal impact. Alessia holds a master’s degree in Economics, Institutions and Territory from the University of Turin and a Master 2 in International Administration and Management of Territories from the UPEC in Paris.

Young female entrepreneurs at the heart of COVID-19 recovery

Building Back Equal – The New Normal