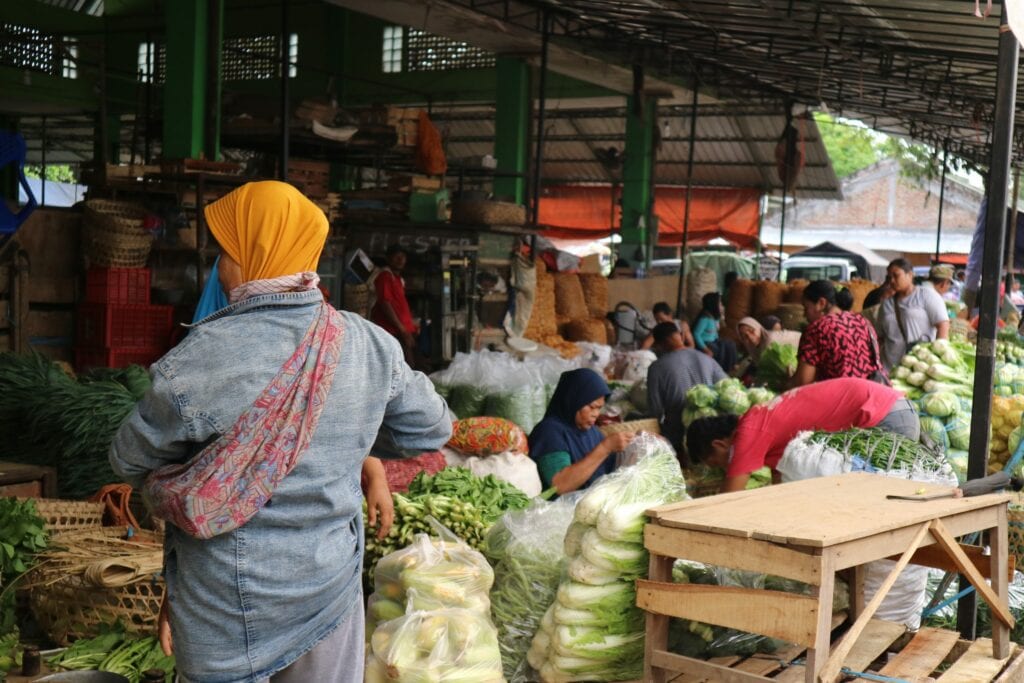 Yayasan Annisa Swasti, known as Yasanti, was established in Yogyakarta, Indonesia in 1982 as one of Indonesia’s first non-profit organizations that empowers women through community organizing, education, and financial independence. Focusing on women porters in traditional markets, home-based workers, industry workers, and entrepreneurs, Yasanti has not only supported women to independently manage their finances but also formally recognize home-workers through government decrees.

Now, after almost four decades, Yasanti has started to seek alternative funding beyond aid funding to continue their work in empowering women. It needed to explore innovative ways to reach financial sustainability once the funding from the Australia – Indonesia Partnership for Gender Equality and Women’s Empowerment or MAMPU ceases in 2020.

During Yasanti’s discussions with Kopernik, the topic of establishing partnerships with the private sector through corporate social responsibility programs came up. However, as Yasanti advocates on behalf of workers and laborers, it had some concerns due to existing ‘us versus them’ perspectives between private sector stakeholders and non-profit organizations which may not be reconciled. This sentiment has prevented the organization from pursuing partnerships with corporations in the surrounding area of Yogyakarta and Central Java, Indonesia.

Yasanti’s concerns illustrate a common challenge in the social sector: How can non-profit organizations explore alternative financing schemes while staying true to their values and mission? Often CSR funding is subject to the corporations’ changing focus, thereby exposing non-profit organizations to a misalignment in values and the risk of abrupt partnership discontinuation.

These partnerships, however, could also be viewed as opportunities for successful cross-sector collaboration – with the right intermediaries in play. In the case of Yasanti, Kopernik’s role was to support the organization in exploring different partnerships which were previously inaccessible to the organization.

An issue that required urgent attention was access to toilets for women porters in traditional markets. Yasanti had been advocating to the market operator on the importance of providing changing rooms and toilets for women porters. It took seven years of advocacy efforts for Yasanti to successfully secure a changing room for the women porters. A lack of toilets, however, still remained. To secure access to this basic need, Kopernik and Yasanti engaged Yayasan Pundi Amal Peduli Kasih (YPP) – a CSR program funded by two major national television networks, SCTV and Indosiar to support this initiative.

YPP proved to be a right fit for Yasanti as the foundation already had a portfolio of past projects focusing on providing support to underserved communities in Indonesia. One of YPP’s commitments is to provide support for communities in meeting their basic needs and gaining decent livelihood, which includes having access to shelter and hygienic sanitation facilities. With ties to major television networks, YPP was also passionate about advocating for the lives of underserved communities through heartfelt, empowering stories. Right away, these values aligned with Yasanti’s mission.

Once the values were matched, the goals and actions that needed to be achieved were clear and well-aligned between both parties. Thus, what began as a conversation for this particular problem, evolved into a discussion around long-term support for women porters in the YPP program. Rather than just provide funding for the toilets, YPP also used their influence with the traditional market operator and advocated on behalf of Yasanti to take prompt action. This led to a multi-stakeholder agreement between the women porter’s association, Yasanti, YPP and Yogkayarta’s Department of Industry and Trade to ensure swift action on toilet construction for the women porters.

Yasanti was a perfect model of a non-profit organization that stepped out of its comfort zone to build collaborations with unconventional partners, resulting in a better outcome than what was initially intended.

Another issue that required support was Yasanti’s health check-up program for women workers. The check-ups have been funded through collecting funds from the members of the women workers’ association. But, at most, this covered only 10% of the required expenses, while the rest was supported by the Indonesian Planned Parenthood Association (PKBI) which provided healthcare services as well as access to vitamins.

With the rise of crowdfunding platforms in recent years, Kopernik initiated a discussion between Yasanti and WeCare.id, a crowdfunding platform to finance low-cost healthcare services for those without  access to insurance. The discussion led to the development of a fundraising campaign in August 2019 which highlighted the experiences of women workers. This was Yasanti’s first experience in online fundraising. Five months into the campaign, more than 600 donors have contributed more than IDR 41 million, which is sufficient to cover 18 months’ worth of health check-ups. The funds have also supported women workers in emergency situations.

Online crowdfunding opened the door for Yasanti to diversify and improve their capacity in fundraising through clear accountability (progress tracker) and engaging storytelling (impact stories), which is a key motivator to encourage people to donate. WeCare explained to Yasanti about the importance of providing detailed budgets and financial reports, communicating their needs clearly, and clear methods on how to convince people to support their initiative.

Beyond toilet procurements and health check-ups, perhaps the biggest insight for Yasanti was the change of mindset within the organization itself to explore new partnership possibilities. A major contributing factor to this shift in perceptions was in identifying the strengths of each stakeholder and clearly aligning goals at an early stage. By considering companies and government bodies as equal partners in achieving a shared goal, Yasanti could break the ‘us versus them’ mentality and come into the discussion in a collaborative manner to leverage each other’s strengths.

Yasanti’s Executive Director Amin Muftiyanah said it succinctly. “It’s not necessarily about completely changing the CSR program’s agenda, but how Yasanti can also be flexible in bringing values and perspectives to negotiate effectively.”

These ‘experimental’ collaborations have provided Yasanti the means to access alternative funding sources, and will hopefully pave the way for Yasanti and other long-established organizations to embrace new partnerships so that they can continue their critical work in supporting the underserved in this modern landscape.

AVPN January 2014 Webinar: Myanmar in Context: Internal Dynamics and the Contest for the Nation