Getting Started in Venture Philanthropy in Asia: Interview with Simon Chadwick

Edited by Simon Chadwick, current Board Director and former CEO of AVPN, the guide contains a wealth of advice from experienced practitioners in Europe where they have been operating for more than 10 years, and also recounts experiences of Asian pioneers and the lessons they learned as new funders and sponsors.

AVPN spoke to Simon about the report and its importance.

Why is this guide important to social investing?

We want new funders and leaders to avoid re-inventing the wheel and have the opportunity to quickly move up the learning curve. They can then move more confidently and quickly into implementation rather than planning. One of the most effective ways to increase your long term social impact is to start sooner and scale quicker!The original version of the guide published by the European Venture Philanthropy organisation (EVPA) was often described by people we met as the most useful toolkit they had come across for getting started in venture philanthropy or social investment. We wanted to bring that guide up-to-date and make it more accessible and relevant for the stage of development of the markets in Asia.

How different is the Venture Philanthropy (VP) ecosystem in Asia as compared to Europe?

Europe has institutions and treaties that create legal, political and fiscal convergence. There is a European identity as well as a national identity which provides for more cross-border collaboration, flow of funds and ease of doing business. This means that aggregate VP investment in Europe has exceeded EUR2.5bn and there are more than 75 active practitioners employing more than one thousand people (excluding volunteers and bro-bono contributors). In EVPA’s 2013 survey, they estimated there were more than 1,400 VP transactions in 2012.Asia is really a series of distinct national markets that each have a different economic and social development history as well as different ways of public and private sector intervention to improve social conditions. There are perhaps two or three pioneering VP practitioners in the main markets and a small group of other organisations gradually developing track records. This is set to change rapidly through the activities of groups like AVPN which is part of a global mega trend towards greater accountability, providing measurable social returns and giving better attribution of value-add.

What are some similarities that cut across the different VP environments?

The passion to do something new that brings together knowledge and experience from the social sector, public sector and private sector. This is usually accompanied by a desire to grow those social organisations that are very effective at what they do so that the social impact scales significantly and more funding is attracted based on evidence of success. At its core the venture philanthropy approach seeks to bring business practices and an investment perspective to build effective social purpose organisations that tackle the most important social problems.

Why did you choose to publish five separate country legal frameworks alongside the main guide?

Each country in Asia has a different legal, regulatory and tax system, and the picture becomes more complicated when you consider a financial return social investment business model because of the national and cross-border financial regulations that affect “investment” managers and the sales and marketing of investments.We wanted to take a very practical approach that helps people get going in the country of their choice. Practitioners are very unlikely to want to set up in multiple countries as social impact is ultimately delivered on the ground in compliance with national laws. What CEOs, their teams and their funders need to know is the framework in an individual country. We have used the same ecosystem perspective and considered setting up the same three generic types of VP or Social Investing (SI) business model in each country.If I am setting up in India then I don’t really need to know about the legal framework in China. If I am setting up in both countries, my head of India needs to know the legal framework in India and my head of China likewise.The report, along with the legal framework guides for China, Hong Kong SAR, India, Japan and Singapore can be downloaded for free from www.avpn.asia/startVPO. 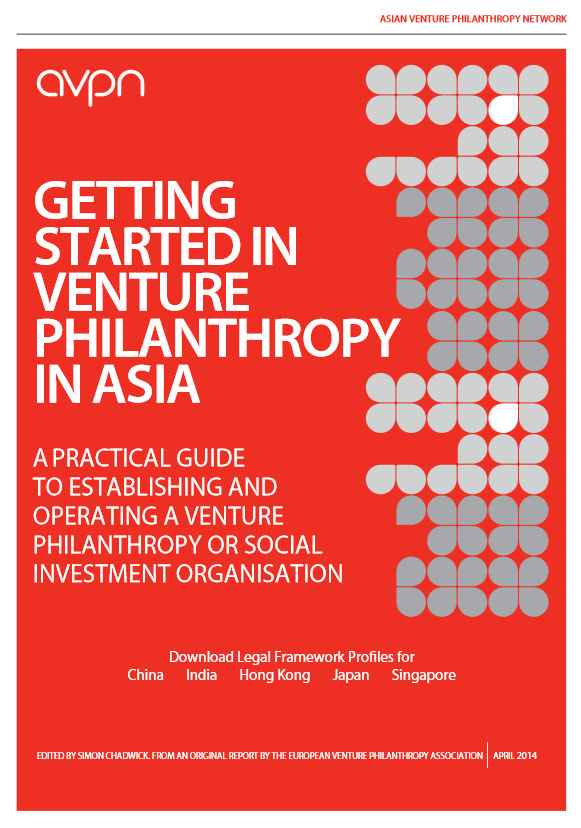