In the Fight for Gender Equality, Nutrition Is Key

Why Investment in Nutrition is Critical

Malnutrition is a global crisis. Poor nutrition has far-reaching implications. On an individual level, it causes people to be more susceptible to illnesses due to weakened immunities. From a wider perspective, malnutrition strains healthcare systems, and causes losses in human capital and workplace productivity. During his sharing, Martin Short, CEO of The Power of Nutrition emphasised that malnutrition costs an estimated US$3.5 trillion annually worldwide[1].

How a Virus Exacerbates Gender Discrimination

Women have been historically disadvantaged in many societies. They have been constantly reported to face significantly higher risks than men of malnutrition and mortality[2]. A global viral pandemic further exacerbates the health inequality gap that currently discriminates against women and girls due to their pre-existing vulnerabilities. 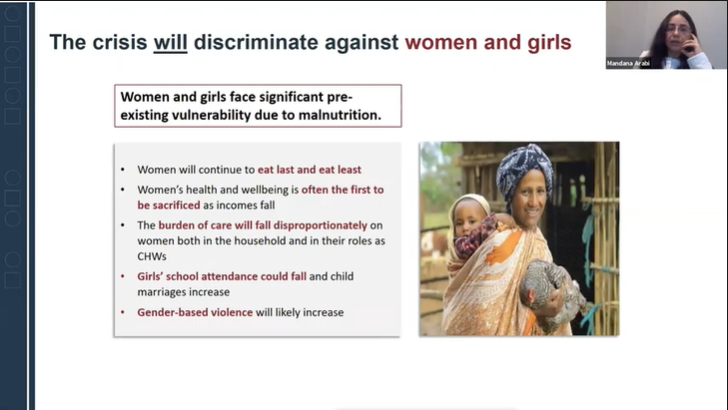 A Crisis Discriminates Against Women and Girls

During the conference, Mandana Arabi, Vice President and Chief Technical Advisor of Nutrition International was quoted saying how “in times of crisis, the well-being of women and girls tend to be sacrificed first in households”. They may be forced to eat the least and the last, especially in times of food scarcity. School-going female students may struggle to attend lessons as they grapple with weakened immune systems. Heightened social tension may also drive incidents of domestic violence and gender-based abuse. Yet amidst such times of female disempowerment, the burden of care during a viral outbreak disproportionately falls on women both as caregivers in households and community healthcare workers. Rapid intervention is necessary to minimise the ramifications of the pandemic on women.

The fight for gender equality has never been more urgent than before.

Yannick Foing, the Global Director for Nutrition Improvement at DSM Nutritional Products strongly campaigned for flour and rice fortification as the solution to malnutrition.

In times of budget constraints, households—especially those from the less developed world—tend to turn towards cheaper yet substantial staple foods. This phenomenon has been exacerbated in recent months by the global economic slowdown. Though such foods may contain sufficient calories, they lack the crucial vitamins and minerals that are necessary for a good immunity that has been proven so crucial at this point in time.

Staple food fortification—where the food is artificially enhanced with nutrients—thus presents itself as an enticing nutritional intervention. DSM Nutritional Products serves as an excellent model for emulation in this field. They offer fortified rice, and wheat and maize flour which have been proven to address micronutrient deficiencies on large scales, in an affordable manner. Investments in staple food fortification have the added effects of decreasing the odds of anaemia and neural tube defects in infants[3]. On an economic front, a poll was conducted to ask delegates how much they thought the incremental cost per person per year of fortifying flour with iron and folic acid was. To much of the delegation’s surprise, it was revealed to be merely US$0.12. 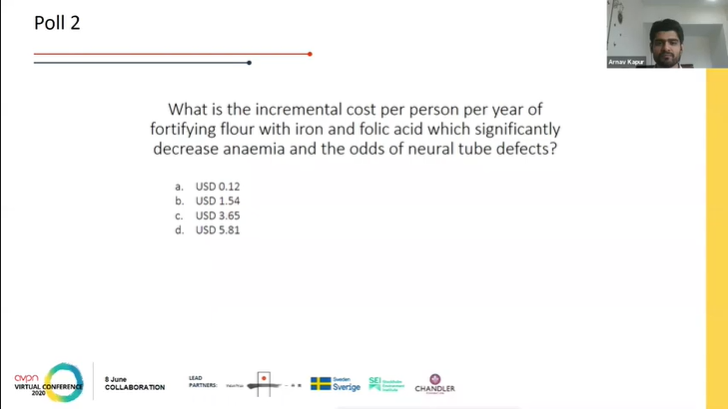 Poll for Cost of Flour Fortification

This solution, however, will not have its intended impact, if it is not delivered to the last mile communities who are often not able to access or afford such products. Governments may also lack the networks and infrastructure required to do a landscape assessment of where the needs are, the technical expertise to scale solutions, and the policy guidelines to formalise cost-efficient nutrition efforts.

The Need for Multi-Sector Collaboration

It is clear that no one government can tackle malnutrition alone. The private sector, individually, will struggle to galvanise efforts in silos too. Governments may impose protectionist restrictions preventing foreign corporations from intervening in their local food systems. During the panel discussion’s ‘Question and Answer’ segment, Martin gave his input on how “a lot of people in development are in denial of private sector engagement”. He warned that distrustful sentiments may impede foreign investors from breaking into local markets. 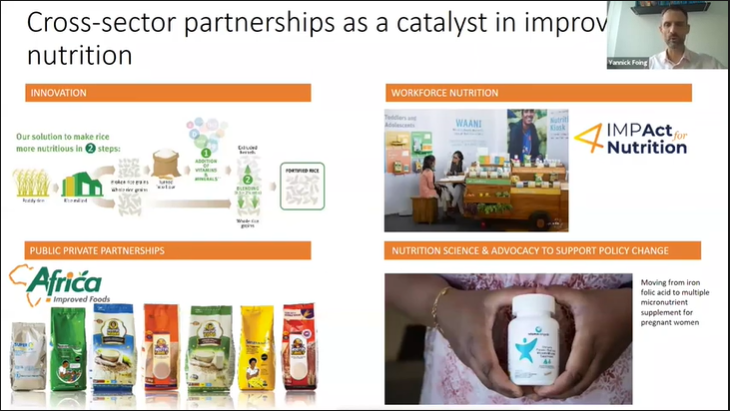 Yannick shared that “if innovation wants to develop in scale, cross-sector partnerships could truly be a game changer for malnutrition.” In essence, the range of solutions to enhance the quality and accessibility of nutritious food, such as social safety net programmes, innovative food delivery services and home-administered maternal supplements, are only effective when the various sectors collaborate with one another. He pronounced that “now is the time for governments, donors, NGOs and the private sector to really work together and form unlikely partnerships”. In exemplification, he shared about Africa Improved Foods, a public-private partnership between DSM, the Government of Rwanda and other donors. This partnership had allowed for the upscaling of the production of fortified food blends and cereals to tackle acute malnutrition and to alleviate stunting in the African continent.

To catalyse such partnerships to integrate novel products and services into mainstream society, advocacy is key.

How Nutrition can be Made Financially Viable through Education

Public education has the potential of incentivising private investments into the market for nutritious foods. “If consumers and beneficiaries know and demand for better nutrition, it might influence policy-makers as well as manufacturers to make changes”, says Yannick. A strong market demand will signal producers to ramp up production and grow the industry, thereby attracting donor funding.

Highlighting the long-term dire effects of malnutrition also serves to attract funding from the private sector. As highlighted by Martin, corporations need to be reminded that “undernourished, stunted children—if unaddressed—eventually develop into stunted adults”. This may lead to poorer workplace productivity and higher absenteeism in the future. Therefore, there is a long-term economic motivation for investments in nutrition.

From the perspective of the government, public subsidies can be used to invest in nutrition. Globally, governments provide about US$700 billion in agricultural subsidies[4] and US$5.2 trillion in fossil fuel subsidies every year[5]. Martin made the powerful appeal that “people need to be sensible in the way they utilise subsidies such that it actually benefits the beneficiaries”. He was quoted saying that “US$50 billion a year is lost out of the global supply chain in the global South because of subsidies in the global North”. Therefore, should just a portion of the subsidies that have been inefficiently allocated be diverted to nutrition, the prospect of raising US$265 billion a year to end world hunger[6] might seem less of an insurmountable task.

Nutrition is indispensable in the pursuit of gender equality. In order for malnutrition to be eradicated in all its forms, there needs to be cross-sector collaboration, greater public awareness and more astute policy-making on an international scale.

In a final compelling statement, Mandana concluded that “nutrition cannot wait. It’s not a good to have. It’s a must have.”

A medical undergraduate student at the National University of Singapore, Tammy has a long-standing passion for humanitarian causes. Having been the Vice-President of the Hwa Chong Interact Club and an organising team member of the Hwa Chong Asia-Pacific Young Leaders Summit, she has had the opportunities of leading diverse teams and volunteering at various non-profit organisations. A public speaker for the World Wild Fund for Nature and founder of a non-profit social enterprise start-up, she is also actively involved in social movements and campaigns. Tammy has a keen interest in project-management, meeting new people and catalysing positive change in society. In the future, she aspires to pursue a career in the field of medical humanitarian work so as to make an impact in the lives of those from vulnerable communities.