Home » India in the Time of COVID-19: How Women in Local Governance Can Make a Difference

India in the Time of COVID-19: How Women in Local Governance Can Make a Difference 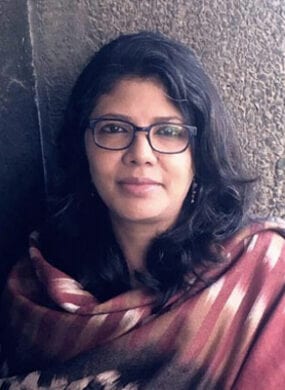 Women’s representation in local governments is essential and has proven to be more impactful than bodies with unequal gender balance. One of the reasons is that women leaders have the same kind of preferences and development priorities as the people in their communities. The following article deals with the situation of women in local governance in India and gives a concrete example of how local governments with an increased influence of women are effective in crises like the current Covid-19 pandemic.

When Justin Trudeau, newly elected in 2015 announced that his cabinet would have 15 women out of 30, Canada moved from 20th to fifth rank globally in terms of women holding ministerial rank. There is significant global focus on having more women in legislature as an indicator of women’s participation in politics. The Inter Parliamentary Union pegs the global average for women in Parliament at 24.5% (both Upper and Lower Houses combined) and it is lower at 19.7% in Asia[1].

While India has many credits with the first woman Prime Minister way back in 1966, and women breaking stereotypes by leading portfolios like Defence and Finance more recently, the proportion of women in Parliament and state legislatures is still small. The representation of women MPs in Lok Sabha (Lower House) is slowly improving from 5% in the 1st Lok Sabha to 14 % in the 17th Lok Sabha. Though the percentage of women MPs has increased over the years, it is still lower in comparison to some countries. These include the highest for Rwanda (61%), South Africa (43%), UK (32%), USA (24%) and Bangladesh (21%).

One domain of political representation that is not as headline grabbing but equally important is women’s representation in local government (or Panchayats). A 1992 amendment to the Constitution of India mandated states to devolve power over expenditure for local public goods to rural village councils (Gram Panchayats) and to reserve a third of all council seats and council presidencies for women. As a result, the political representation and participation of women increased in rural India – more than a million women came into governance roles, which was transformational in itself. But 28 years on, where most states now have 50% of Panchayats seats reserved for women, there still continues dominant narrative about how these women remain titular post holders with their husbands taking the lead.

There is now a new SDGs indicator on the ‘proportion of seats held by women in local governments’ (5.5.1b), but a standardized system to provide comparable statistical evidence across all countries and regions is not yet in place. Nonetheless, efficient and participatory local governance is key to the success of policy prioritization and implementation – and having gender balance during the decision making process is absolutely essential not just for equity but has also been proven to be more impactful.

Take the example of Shyamdulari Devi, Ward Member, from Nawada district in Bihar, one of the poorest states who was part of a leadership programme under Pahel, run by Centre for Catalyzing Change (C3). Travelling unaccompanied to another district for a training was a milestone! Today she has mobilized women from her Musahar community to avail of immunization services and institutional delivery. All of this would not have been possible had she not been part of a structured training and mentoring initiative.

It is important to remember that gender quotas often address institutional barriers. There is, therefore, a need to ensure that they ultimately result in meaningful transformation in politics.

Robust evidence shows how reservation for women at the Panchayati Raj Institution (PRI) levels significantly increases their influence on policy decisions of local government, and that investment decisions made by reserved and unreserved village councils are attributable to differences in the Mukhiya/Pradhan’s (village council head) gender. Importantly, these women invest more in public goods that are reflective of women’s policy priorities, such as drinking water. The investments made by village councils that include reserved seats for women are found to be more consistent with the goods petitioned for by villagers. The mechanism seems to be that women leaders have the same kind of preferences and development priorities as the people in their communities[2]. Other research shows that villages reserved for women leaders have a higher availability of public goods (drinking water, schools, health centres, fair price shops), and the measured quality of these goods is at least as high as in non-reserved villages, highlighting the value of such affirmative action measures[3].

Significantly, political reservations have brought into office women leaders who are relatively inexperienced, have less political ambition, fewer political prospects, and are of lower socio-economic status. There is some evidence that these characteristics affect their investment decisions and oversight capabilities. A study assessing the impact of female political leadership on governance of projects implemented under the National Rural Employment Guarantee Scheme (NREGS) found more program inefficiencies and leakages in village councils reserved for women heads. Political and administrative inexperience make such councils more vulnerable to bureaucratic corruption. However, this study also found that governance improves as female leaders accumulate more experience[4].

There is a strong case for comprehensive capacity building to bolster the effectiveness of political quotas for women in low resource rural settings like India. There is also the need to give it time – while there is policy support for women’s leadership, it is critical to invest in building that leadership. Centuries of power imbalance cannot be shifted overnight.

In Mumbai, female candidates for city council were five times more likely to be elected in districts that had been reserved for women in the previous election but were not currently reserved[5]. In West Bengal, a state that had quotas for two election cycles, voters were more likely to elect women in the third, non-quota election cycle than in communities that never had quotas[6]. Bihar, one of the pioneer states is in its third cycle of gender quotas in Panchayats with 57,887 women elects.

The Pahel model for women’s leadership building that has been run by Centre for Catalyzing Change for over a decade across three electoral cycles, in ten blocks of four districts in Bihar, has demonstrated how women representatives have not only audited basic services, but also built positive collaborations with functionaries to make health centres, Anganwadis (child care centres) and schools deliver better. However, there are limitations to the nature and extent of solutions they can affect – ensuring regular meetings of Panchayats, utilising flexi funds for basic equipment and infrastructure, using grievance redressal mechanisms, ensuring attendance of frontline workers, facilitating access of community members to entitlements or raising awareness of services.

Women leaders from Bihar make a difference in Covid-19

Panchayats are the most effective and sustainable ways to respond to health emergencies and disasters like floods etc. During the current COVID 19 crisis, women leaders from Panchayats in Bihar have taken early initiatives to understand the basic prevention messages from the health providers and are actively promoting handwashing practices and supporting village sanitization efforts. They are making sure that ongoing basic services are delivered at the doorstep by accompanying the frontline workers. Many of them are visiting the Panchayat level isolation centres to observe their operations in terms of adherence to guidelines. Some of the more social media savvy leaders have even shared awareness and assurance messages.

We are looking to collaborate to bring with partners and other AVPN members to work with us to provide immediate relief measures and also for long term support in the expansion of our projects.

In the immediate term, partner with us to:

Post the crisis, we are looking for collaborating to:

In a vast and diverse country like India, local governments are the only solution to ensure that integrated relief and development efforts reach the most deserving, particularly as we struggle in these unprecedented times of COVID 19. Policy planning in this direction needs to factor in the role of panchayats along with policy directives for equipping them to deliver in their role.

AVPN members, civil society and government must find a way to harness women leader’s capacity and voices in the  post-Covid economic reconstruction and social reformation and include women in response and recovery decision-making.  Previous humanitarian crisis have shown the benefits of according due importance to women’s equal voice, participation and leadership. At various levels, grassroots, local,  national or international level, the need is to bring voices of women into decision-making . The need is also to leverage the capacities of women’s organizations to ensure a more robust community response.  Many bailout and stimulus packages are being considered and designed, and these must include investment in grassroots women’s leadership.

[5] Bhavnani, Rikhil R. 2009. “Do Electoral Quotas Work After They Are Withdrawn? Evidence from a Natural Experiment in India.” American Political Science Review 103 (1): 23-35

Madhu leads interventions in advocacy and implementation that are focused on political empowerment of women in the Panchayat system, addressing gender-based violence, and ensuring accountability and quality of care in reproductive health services.

She has worked with international agencies including Oxfam GB, UN Women and CEDPA at the South Asian and national levels. Her thematic expertise extends across a range of gender issues, including violence against women, women’s political empowerment, sexual and reproductive health and gender and social inclusion.