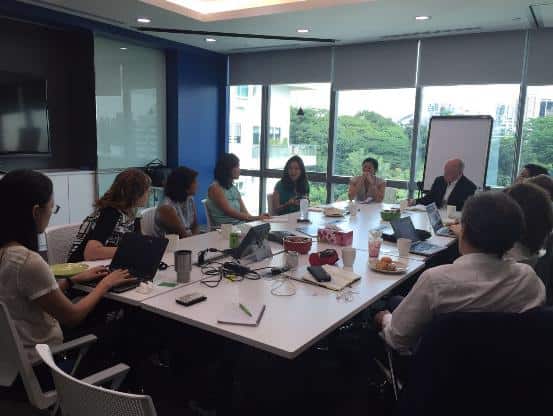 On 15 th July 2016, AVPN held the first in a series of roundtable working group events to facilitate discussion around the relationship between People, Planet and Profit in business.

The aim is to gather like-minded corporate members together to discuss topics of interest and share experiences, challenges and best practices.

The first working group centered on measuring social, environmental and business performance, in partnership with Mars, Inc., one of the world’s largest food companies.

Mars operates an internal think tank called Catalyst, which has been undertaking pioneering research into the Economics of Mutuality (EoM), the relationship between People, Planet and Profit in business.

Members gathered at Mars’ Singapore office to discuss this theory, measurement and their idiosyncratic experiences attempting to tackle this issue in their own corporate setting. The event was attended by a range of corporate representatives, keen to learn more about this topic. Participants attended from AVPN, Mars, Danone, Microsoft, Grab, Bridge, and Medtronic.

Bruno Roche, Mars Chief Economist and Managing Director of Catalyst opened the discussion with an introduction to the Economics of Mutuality. EoM is a new management theory that focuses on the achievement and measurement of non-financial outcomes.

These are an indicator of the impact of business on society and the environment, but also ultimately drivers of financial performance. EoM is being incorporated into Mars’ corporate strategy, and Mars’ partner, Oxford University’s Saïd Business School, is disseminating the core principles in an academic context.

Mars have piloted application of this theory in a number of projects, including micro-distribution networks in Kenya’s poorest urban areas. By working with academic and NGO partners, they have been able to build a social capital map of their target market, which they believe to be superior to the traditional geographic sales division.

Pilot Programs – There are a wide range of pilot initiatives in place among the group, with business in extreme locations, serving poorer communities a strong theme. For example, Medtronic have been involved in work on hypertension in Sub-Saharan Africa and Incontinence in Colombia, while through the Danone Écosystème Fund, Danone has been supporting projects aiming to scale water stewardship from Indonesia to Brazil.

Measurement of pilot results uses a range of metrics such as number of jobs created and increased access to healthcare.

Philanthropy Mandates and Corporate Governance – The topic was raised of how citizenship efforts are affected by the structure of corporations. Mars, Inc. benefits from its position as a privately held company, giving it the freedom to pursue groundbreaking research with Mars Catalyst. Publically traded companies have fiduciary responsibilities that can restrict such efforts. However, these can be overcome where there is a business case, as Danone has demonstrated with its Danone Écosystème Fund.

Accessibility – Both Grab, through their partnership with local Singaporean NGO (these)abilities, and Microsoft Philanthropies have been actively involved in work towards inclusion of people with disabilities as citizens and consumers of their product. Grab highlighted the importance of active engagement with the disabled community in this endeavor, which they pursued through a 9-week accessibility workshop.

Representatives were able to learn a great deal about the Economics of Mutuality and about each others’ efforts to pursue the combined agendas of People, Profit and Planet in different corporate settings. A few of the main takeaways were:

AVPN hopes to build on the success of this roundtable as the series continues, exploring further areas for learning and cooperation between good corporate citizens across Asia.

Paul is a volunteer at AVPN and a specialist in social finance. Prior to AVPN, he has 7 years of experience across financial services and development organisations. He worked as a Programme Advisor to the United Nations Social Impact Fund (UNSIF), hosted by UNDP in Bangkok, Thailand. He has been involved in social enterprise implementation in Liberia with Mercy Corps, and prior to becoming a development professional he was a Vice President at JP Morgan where he worked in Emerging Markets trading. Paul holds a BA in Economics from Cambridge University and an MBA from INSEAD.

AVPN April 2016 Webinar Recording: Investment Readiness- perspectives from both sides of the table