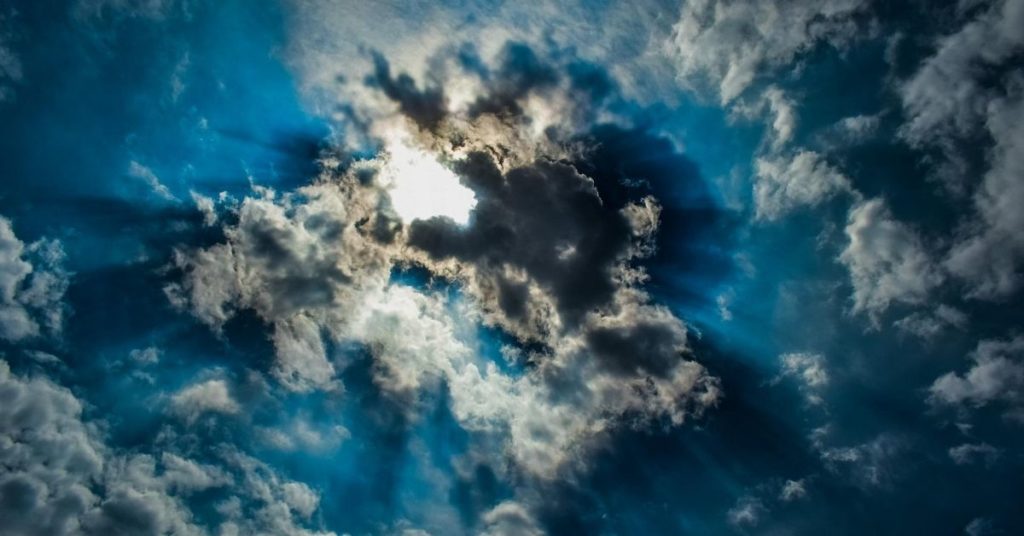 Adverse Impact on South Asia due to climate change

According to an Asian Development Bank Report, South Asia is one of the region’s most affected by climate change globally.

According to the report’s findings, the total climate change cost in South Asia will increase over time and will be prohibitively high in the long term. Without global deviation from a fossil-fuel-intensive path, South Asia could lose an equivalent 1.8% of its annual gross domestic product (GDP) by 2050, which will progressively increase to 8.8% by 2100.

Some of the countries projected to be hardest hit in GDP loss include: Maldives, Bangladesh, Bhutan, India, Nepal and Sri Lanka facing annual GDP losses of 2.0%, 1.4%, 1.8%, 2.2%, and 1.2% respectively, by the year 2050. However, should the global community take action in-line with the Copenhagen–Cancun agreements to keep the global mean temperature rise below or within 2 degrees centigrade, the region would only lose an average of 1.3% of GDP by 2050 and roughly 2.5% by 2100. It’s therefore critical to accelerate climate financing for solutions operating in the region, especially in the private sector. The sector has evolved to take a multi-pronged approach supporting adaptation, resilience and mitigation.

While climate finance typically has been allocated in preference to mitigation solutions, in recent times there have been calls to increase funding towards adaptation solutions. In fact, it is considered a smart investment strategy. 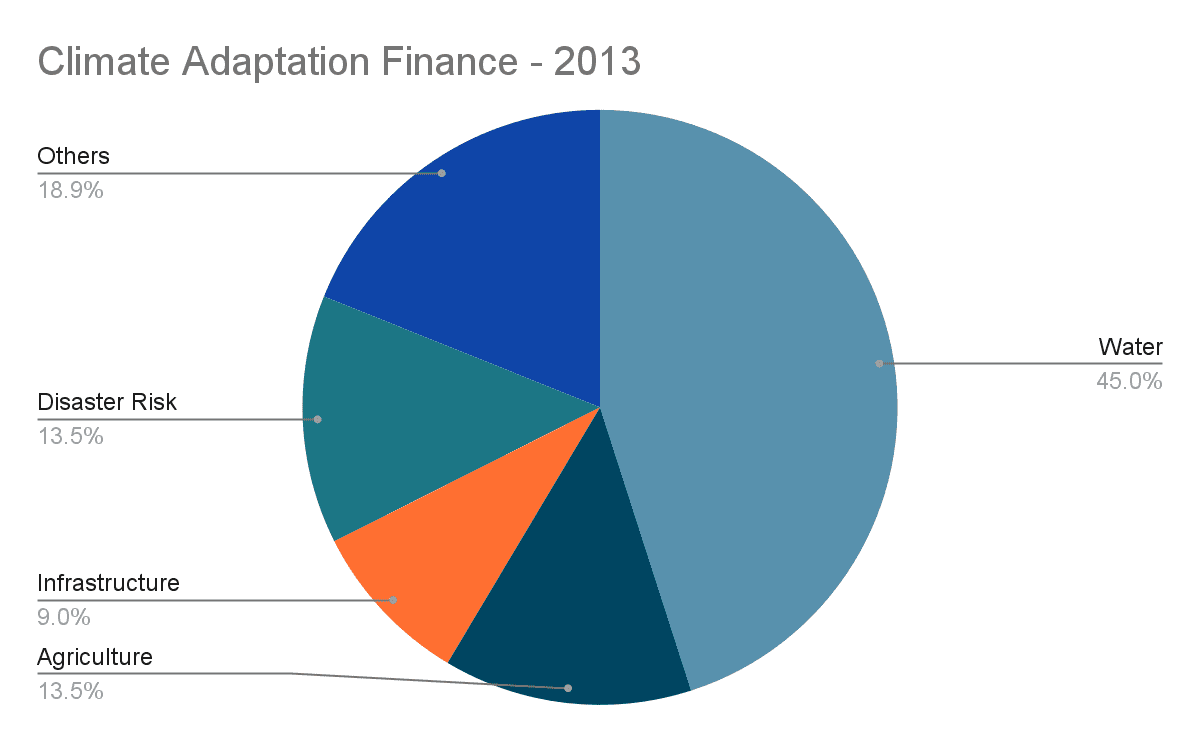 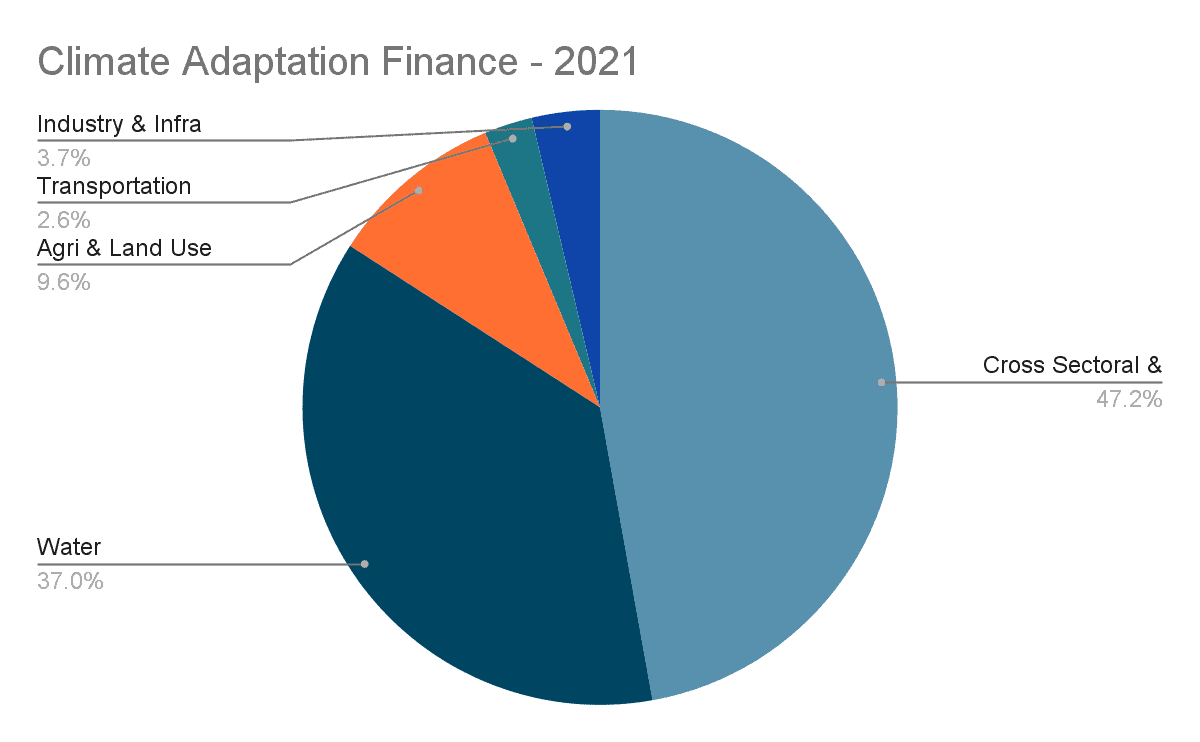 Over the past decade, we’ve seen the funding directed towards adaptation solutions increase by 2x, the majority of the capital going towards cross-sectoral projects.

Our learnings in the space has been through the implementation of the Adaptation SME Accelerator Project, where we saw a pipeline of almost 300+ companies and closely engaged with 16 of them. In Asia, we saw a diverse applicant pool across sectors such as agriculture, energy, water management, climate risk analytics, and transportation amongst others. The final cohort that we selected had the following representation – 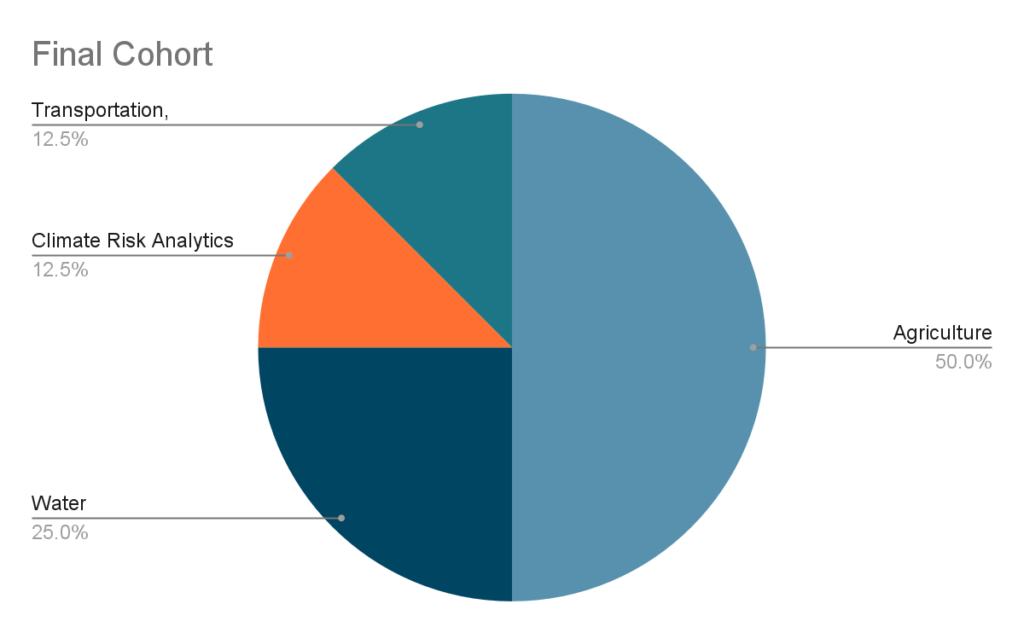 Subsector focus of the final cohort – 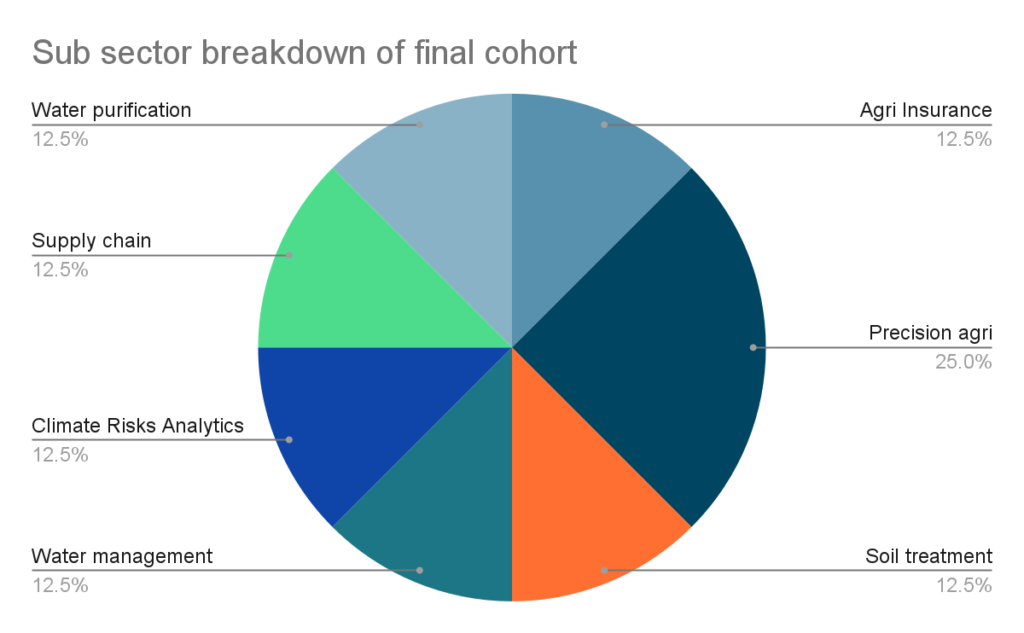 These are the key learnings from the program:

1. The health sector plays a critical role in climate adaptation and resilience of communities.
Climate change is the biggest health threat that exists to the human kind. including by leading to death and illness from increasingly frequent extreme weather events, such as heatwaves, storms and floods, the disruption of food systems, increases in zoonoses and food-, water- and vector-borne diseases, and mental health issues. Communities displaced due to climate change also tend to be more prone to vector borne diseases and have poorer access to healthcare facilities.

Unfortunately, founders operating in this space lack the ability to articulate their impact when it comes to climate adaptation and resilience. Hence, they miss out on the ability to tap into the increasing pool of capital under the climate thesis. There is also a need for investors to start considering health tech solutions from the lens of climate adaptation.

Coastal regions are disproportionately impacted due to climate change.

Startups such as Solnce Tech that provide solar solutions for water desalination are the need of the hour. However there is insufficient dealflow of innovations from coastal regions / implementing solutions for such regions.

There is a critical need to drive and support such innovations from coastal areas, else the communities from these regions are greatly at risk. Global Environment Facility, a major player in the space of climate funding, runs several programs focussed on sustainable management and development of coastal zones, a critical resource for food and livelihoods, especially in developing countries.

Lack of standardization of impact metrics makes it difficult to measure impact. Different players across the globe are taking different steps towards the same goal. There is a Digital Finance for Climate Resilience Taskforce led by BFA Global and UNIDO / PFAN that is working to bring together ecosystem developers on a common platform to standardize metrics for climate adaptation businesses. In India, Climate Collective is another organization that is doing significant work in impact metric standardization, in partnership with ANDE.

Improved articulation of impact plays a critical role in incentivising investors in deploying capital. There is a critical need for these players to come together and offer a platform that allows for impact measurement and assessment services for early stage innovators at affordable cost.

Several of the companies that participated in the accelerator started off by building products that would solve challenges in the local context, but created solutions that had universal applicability. Absolute Water India is just one example of a startup that increases the availability and quality of water in areas projected to experience water stress by organically treating and converting raw sewage wastewater into potable water through a system that naturally degrades pollutants and converts it into nutrients. They developed this innovation due to the increasing levels of groundwater contamination and untreated wastewater that they would see in their city of Delhi. But their product has a fair application in other parts of the globe too, in areas of extreme water scarcity such as West Africa, as well as high water contamination facing regions in Southeast Asia.

This builds resilience to increased drought and water scarcity that affect residential and commercial water use, a necessary requirement across the globe, especially the Global South.

This is to say that most of the companies in this space are underestimating their market opportunity.

5. Who pays? Government is a major clientele.

The final beneficiary of the products and services in this space is more often than not the lower income population segment, who cannot afford to pay for them. Thus, several governments and state agencies have budget mandates to provide for products and services that can reduce the suffering of the poor. This can also be a pool of capital that private companies can tap into.

Komunidad Global Pte Ltd is an environmental intelligence platform, which helps businesses and governments use earth observation data and analytics to accurately assess physical risks and improve resilience. A major revenue driver for them are the government projects they undertake, with an aim to build resilience to extreme weather events, flooding, and other climate-related events that affect communities and societies.

Hence, tying up with governments and public agencies who can pay for these services in full or partial capacity has proved to be an effective strategy.

6.Financing is a big challenge; private sector needs to step up to bear the responsibility and emergence of innovative financial structures

While there is a case to be made for the need of more climate adaptation solutions and consequently a case for increased funding towards such solutions, significant efforts still need to be made towards improving the financing gap for the sector – the allocations to adaptation projects have hovered around only 10 – 20% of the total climate funding over the last decade. This can be addressed if the private sector takes up a larger role for the financing of climate adaptation projects and initiatives – currently their funding is pegged only at 2%, and looking at innovative financial structures such as climate bonds.

UN’s IPCC estimates that $2.4T worth of investments are required across the globe in climate related projects whereas currently only $632B annually allocations are made in 2021. These investments need to rise upto $4.3T by 2030 to meet our climate targets. Private sector can play a big role here, especially by focussing on early stage innovations. 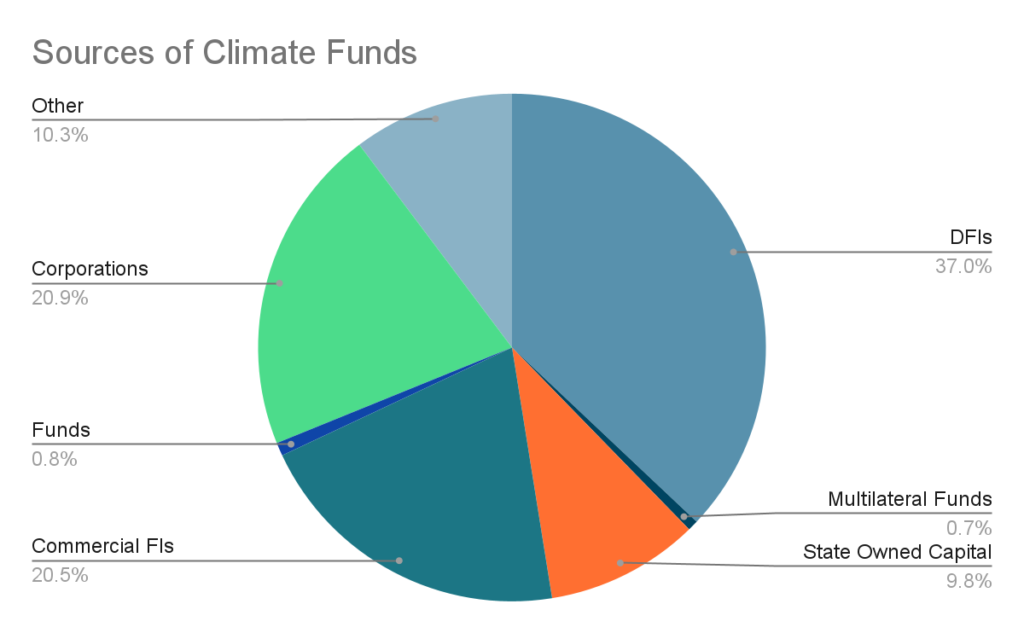 Early stage ventures require patient capital, which includes equity and grants – unfortunately, currently only at 39% of climate financing. These need to scale up to provide the necessary support for the early stage innovators.

Equity funding in the climate sector is primarily led by corporate investment arms. GM Ventures participated in an $11 million funding round for Soelect Inc in Feb 2022, while United Airlines in December 2021 participated in a $35 million funding round for hydrogen-electric jet-engine developer ZeroAvia Inc. Early stage founders should look to engage and establish relationships with such corporations from very early stages of building their businesses.

There is also an emergence of climate venture funds in the last 2 years. The Lightsmith Group is a good example with a $186MM P-E fund focussed on climate adaptation.

Green Bonds can be a solution to address this financing gap.

Outcome based financing solutions can prove to be an effective way to tackle the financing gap in the space. Since the risk investments in these projects are backed by grant money, it does not significantly burden the early stage companies when it comes to servicing the debt. The risk investor is also able to recycle the same money for an increased number of projects.

While currently only 5% of climate bond funding goes towards adaptation projects; 33% of these comes from the private sector (corporations and private banks), and has been on an upward trend in the last decade. South Asia and SEA present significant opportunities for deploying the adaptation capital – more proportion of countries in the South Asia region have climate adaptation sectors in their Nationally Determined Contributions (NDCs) in comparison to other regions of the world. Also, they have an increasing number of bond issuers active in the ecosystem – ASEAN had 20 bond issuers issuing 32 instruments in 2019, up from 15 bond issuers issuing 16 instruments in 2018. Gameen Impact Investments India is one such active player in the space and is looking to deploy 15-20 micro bonds within the next 12-15 months.

Shreyansh heads programs and partnerships for the South & SEA at Village Capital, an entrepreneurship support organization involved in capacity building programs for impact entrepreneurs. He is responsible for regional strategy development, program design and implementation. Shreyansh has worked with close to 120+ founders from across South Asia, supporting them in their fundraising and business development plans. Capital and partnerships can be critical to early stage founders. Shreyansh helps them unlock both. He was exposed to the field of entrepreneurship at an early age in his career while working with passionate mission-driven entrepreneurs. Since then he has always looked for opportunities to contribute that lie at the intersection of business, capital, and impact. His expertise lies in building and implementing 0 to 1 projects. Shreyansh also has a key interest in the nonprofit sector. He has worked with several NGOs in the past in the field of education.