Kopernik has been working with Indonesian women to make clean energy technology available to remote communities. We recruit and train women to sell simple solar lanterns, water filters and clean cookstoves in their communities. Over the past three years women entrepreneurs have sold more than 25,000 clean energy technologies in eastern Indonesia, reaching nearly 140,000 people. Together, these customers will save around $1,900,000 in fuel expenditure during the lifetime of the products they purchased. Along with the financial benefits, we have also seen how these technologies improve health, productivity and livelihoods. The value of clean energy technologies is undeniable, but the greatest challenge is placing the technology in the hands of people living in the last mile[1] that need them the most.

The first part of the challenge is in raising awareness of the technologies in target communities, and helping consumers to understand the value of their benefits. To determine which information dissemination method leads to higher sales, Kopernik organized two promotional campaigns in eastern Indonesia over the course of one month.

One campaign was a local newspaper advertisement directing readers to a location where the technology could be purchased. The second campaign provided additional financial incentives to a network of 244 sales agents and enrolled the highest sellers in a competition to win a motorbike. 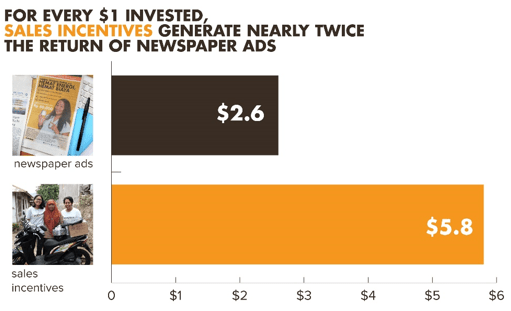 Overall the two campaigns had a positive result on sales. During the campaign month, the sales agents sold over 300% more technologies as compared to average monthly sales of 760 in the prior 4 months.

In terms of the return on investment, we found that for every $1 invested, sales-based incentives returned $5.8 in sales[2] versus $2.6 for the local newspaper advertising campaign. This may be because when it comes to converting potential customer leads into sales, women entrepreneurs have shown to be more effective at making a sale than the costly advertising that may reach a greater audience but result in fewer sales. 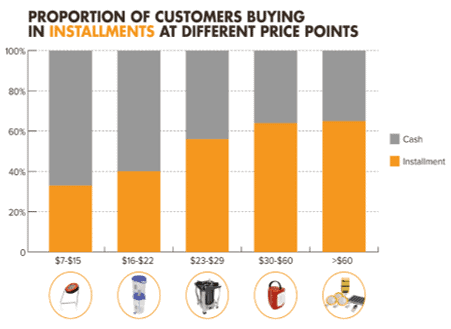 Once consumers become aware of the technologies and their benefits, the second part of the challenge is whether consumers can afford them. From 325 interviews, we learned that financing was critical across all price points. Once the cost of the technology exceeded $30, access to credit became a necessity; as many as two-thirds of customers needed to pay in installments to finance their purchase.[3] 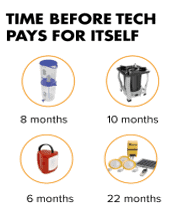 Even for lower-cost products (within the range of $7-$15), a third of consumers chose to purchase them on installments.  This is understandable in areas where the average monthly income for a household is $189.

The fact that each technology enables the user to save money that would otherwise be spent on fuel means it is easier for customers to afford the installments. Each item would pay for itself within 6 to 10 months for the mid-range technologies such as water filters, cook-stoves and cell-phone charging solar lights, and within 22 months for the solar home systems. While most sellers would probably not offer such generous terms, these savings nonetheless make it easier for low-income customers to pay for the technology.

This research highlights the critical role that access to appropriate promotional campaigns and end-user financing play in the purchasing decisions of last mile communities. While the findings are context-specific to eastern Indonesia, Kopernik hopes that they serve as a starting point for technology producers and distributors to evaluate what has been proven to work in reaching underserved, remote, low-income customers.

[1] Last mile is defined as both: i) geographically restricted and isolated areas and ii) areas with low-income underserved population and poor infrastructure.

[2] Kopernik includes only “extra sales” attributable to the marketing campaigns. In the case of the incentive campaign, the sales agents have been selling an average of 760 technologies per month in the 4 months preceding the campaigns, so the sales on top of the 760 were counted. In the case of the advertising and physical location campaign, all sales were counted as this campaign generated a brand-new sales channel with no previously existing monthly sales.

[3] We asked customers who bought technologies ranging in value from $7 to $135 whether they paid for their purchase in lump-sum cash payment or in installments. The technologies included solar lanterns, water filters, biomass cookstoves and solar home systems and were sold across 17 different districts in East Nusa Tenggara province.

Young female entrepreneurs at the heart of COVID-19 recovery

AVPN 2020 | Collaborating to achieve the SGDs