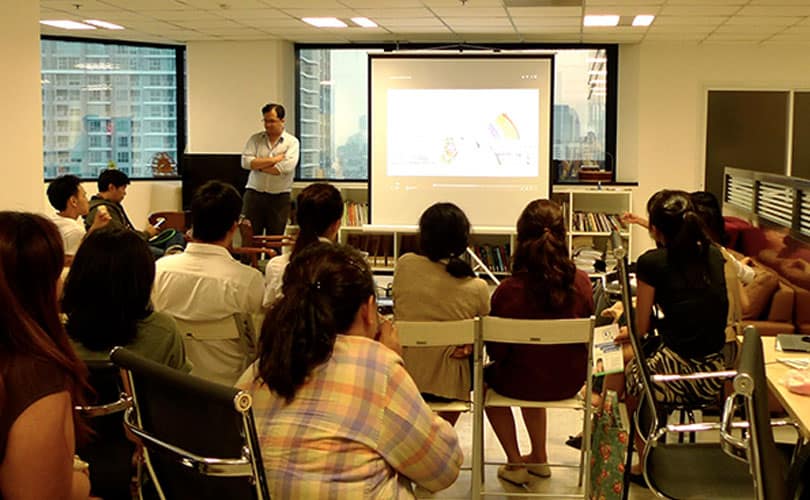 Deal pipeline or the supply of viable social enterprises remain an issue in Asia. While measures address the symptoms by stepping up deal flow temporarily, the Thai intermediary ChangeFusion is a pioneer in creating an eco-system for social enterprises through collaborations with businesses and governments thus making entrepreneurial success more sustainable.

Based in Bangkok and active since 2001, ChangeFusion grows social entrepreneurs for creative and sustainable change. ChangeFusion is a non-profit institute under the Thai Rural Reconstruction Movement Foundation under the Royal Patronage.

Crucially, ChangeFusion is networking heavily to influence the market environment for entrepreneurs. It brought in and linked to intermediaries and other funding and networking platforms such as UnLtd, ChangeVentures, Taejai.com, a Social Investment Portal to provide services to social enterprises. ChangeFusion is also particularly active in working with the Thai government agencies for them to enter into contracts with the social enterprises that ChangeFusion supports. Most recently its efforts in working with the Thai stock exchange and relevant government officials to design new and attractive mechanisms for socially responsible investment[iii], have come to fruition in the launch of the Mutual Fund ‘Khon Thai Jai Dee’ or BKIND in November 2014.

The BKIND was launched in collaboration with BBL Asset Management Co., Ltd. (BBLAM) and Khon Thai Foundation[iv]. Managed by BBL Asset Management Co., Ltd. (BBLAM), the fund itself is registered by the Bangkok Bank Public Company Limited, entrusted by Siam Commercial Bank Public Company Limited and audited by the PV Audit Company Limited[v]. The fee structure accommodate each party’s interest with 2% management fees, 0.04% trustee fees, 0.050% registrar fees and an overall fee of not more than 3%.[vi]

It is governed by principles of Environment, Society, Good Governance, and Anti-Corruption (ESGC):  “The fund aims to attract funds from the general public and juristic persons to invest in businesses that exercise social responsibility in these areas: the environment, social, good governance and anti-corruption, which grow sustainability and provide good returns in the long-term. The fund will also donate part of its income from management fees to foundations or organizations which create benefits for Thai society.”[vii]

The BKIND invests into “equities of companies listed on the Stock Exchange of Thailand (SET) and/or the Market for Alternative Investment (MAI) or other secondary markets of the SET, with an average of not less than 80% of the fund’s Net Asset Value invested each accounting year. The fund has no fixed duration and invests mainly in companies that exercise social responsibility in ESGC. The investment portion is at the discretion of the fund manager. The remaining assets will be invested in other equity instruments not mentioned above, including unlisted securities, debt instruments, financial instruments and/or deposits, as well as securities or other assets or earnings by other means as stipulated or approved by the Office of the Securities and Exchange Commission (SEC).”[viii]

The fund, based on its charter, can invest in non-listed companies of up to 15% of the fund size accordingly to Thai SEC regulation. The objective is to consider equity investment of scalable and well run social enterprises in the future[ix].

In addition this, the “fund will donate money to foundations or organizations which create benefits for Thai society at least once a year and 40% of the fund’s management fees will be donated by the management company”.[x] This makes it the “first mutual fund in Thailand” to do so[xi]. Donations can be 0.8% of the net asset value[xii]. The beneficiaries are non-profits and are selected by a committee[xiii]. The fund was “launched during 20-28 October 2014 with an Initial Public Offering (IPO) at 10 baht per unit. 1,000 baht is the minimum purchasing amount and the minimum incremental amount. The registered fund’s value is specified at 5,000 million baht.”[xiv]

ChangeFusion previously partnered with the Khon Thai Foundation in the Taejai project, which is a crowdfunding platform for various projects. Other cofounders of the Taejai project were Bangkok Business News, Ashoka Thailand, TYPN (Thai Young Philanthropists Network), and Opendream[xv].

The idea for setting up the BKIND fund was a multi-stakeholder group effort between Khon Thai Foundation, BBLAM & ChangeFusion, especially in the conceptualisation and the design of the fund. BBL Asset Management (BBLAM) then becomes a mutual fund manager (by law and also by practice) to create and run the fund’s operation and select investment portfolio of listed companies (not donation portfolio), related with investors and promote the funds through its normal channels. Then they also involved Ashoka and other non profit leaders as a strategic partners for reach, sourcing non-profits and advice. Ashoka was also instrumental in setting up a project team consisting of six people including two from BBLAM, one from Khon Thai Foundation, one from Ashoka and one from Changefusion and finally two public figures. This project committee meet formally once a month to drive the process.[xvi] [xvii]

While the fund does not directly benefit entrepreneurs in ChangeFusion’s portfolio, the rationale for ChangeFusion was to set an example on how different parties can setup such a fund that would drive social enterprises in Thailand. It could have been a Venture Philanthropy, impact investing or other fund, as long as the fund benefits socially responsible businesses and recycles its profits.[xviii]

For the Khon Thai Foundation, the rationale was “that the foundation would like to see every parts of Thai society, including investors, united to solve social problems. […] The capital market sector can surely help; one can consider if only 1% of the 14 trillion baht yearly investment in Thai listed companies can be channelled to social investment. This 1% investment for social good will in turn allows the remaining 99% traditional investment to grow sustainably.”[xix]

Based on these motivations, “Khon Thai Foundation and ChangeFusion Institute brought the idea to BBL Asset Management. We then worked together to convert the aforementioned principle into a mechanism embedded in the ‘Khon Thai Jai Dee’ mutual fund. This mechanism aims to create a two-fold benefit. One is to allow investors to support companies that exhibit good corporate governance practice according to the world-wide recognised ESGC criteria. The second-fold benefit is a mechanism which routinely directs 0.8% of investors’ money (through 40% separation of the fund’s management fee) to support selected public benefit projects in different segments which aim to solve societal problems and create a better society.“[xx]

From initial contact with BBLAM in early 2014 to launching the fund in October 2014 it took 7 months. To date [in April 2015] the parties are still working together on building a group that is able to conduct the social investment cycle for the fund.

In the process, the parties experience differences and overcame them in different ways. One issue were different risk-taking levels when invested in social projects. Some projects were sourced and proposed for funding consideration but were not selected because different parties had different understanding of funding criteria and preferences. This would create friction and expectation mismatch between sourcing partners and potential investees. Since the fund was supposed to be successful as to encourage other funds to follow, early-stage enterprises or a social VC approach proofed too risky for investment and instead low-risk, proven style investment of large MNCs with socially responsible mandates was chosen.

The solution to this was to develop more rigorous and precise criteria for project selection that everyone agreed upon. This is similar to many ground rules. Many ground rules such as process, approach and direction had to be defined, mutually understood and agreed on.

Yet, while flexibility is evident in this example, mission drift can be an issue in projects with many stakeholders. Interestingly, ChangeFusion found that by sticking to agreed criteria for project selection, yet to remain active and flexible with potential investees solves the issue of mission drift. In the case of sourcing partners, ChangeFusion and other sourcing partners actively worked with projects to adjust and improve their plans in order to fit the criteria.

Key lessons around common bottlenecks are then to have mutually agreed criteria, frequent informal discussion as well as formal meetings and to use personal connections to help moderate and resolve conflicts.

ChangeFusion’s is a pioneer in creation the social enterprise eco-system in Thailand and for building partnerships across sectors. In the course of setting up BKIND ChangeFusion encountered some issues in multi-sector collaboration such as aligning stakeholders’ different interests and missions for the fund. Through a process oscillating from rigorous to flexible and between formal and informal, ChangeFusion was able to overcome these hurdles and now lives to tell the tale of the first time collaboration between financial sector and social sector to create a mutual fund that benefits society directly.

[xix] Mr Vichien Phongsathorn, the Chairman of the Board of Directors of Khon Thai Foundation in http://impactconnect.asia/updates/news/Thailand-launched-first-ESGC-Mutual-Fund/1/

Building Consensus for Impact Management and Measurement in Japan: A Case Study on the Japan Social Innovation and Investment Foundation