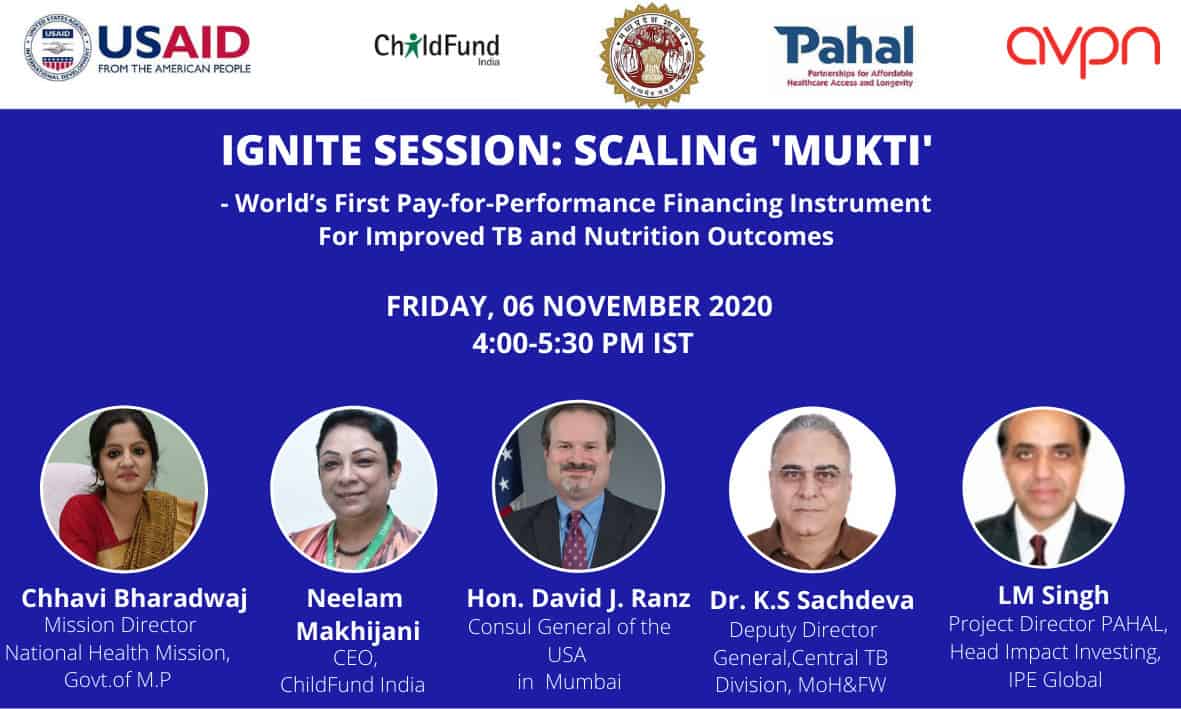 The COVID-19 pandemic has brought into focus infectious diseases like Tuberculosis (TB) which affects 10 million people annually across the world. TB in India is not just a public health problem but also a serious economic threat causing an economic loss of $32 billion and 100 million workdays. Studies show that TB has a bi-directional relationship with Malnutrition and Low-Immunity which further exacerbates treatment outcomes for TB patients and pushes them further into poverty.

The ‘Mukti Pay-for-Performance’ financing instrument was launched in March 2020, in a phased manner, to improve nutrition status and treatment outcomes of TB patients in the state of Madhya Pradesh. The intervention is being implemented by Child Fund, a leading international NGO, in partnership with and support from the National Health Mission, Government of Madhya Pradesh; USAID; and the Central TB Division, Government of India.

If India is to reach its target of eliminating TB by 2025, it needs a collaborative and transformative approach that promotes innovation and financing models like ‘Mukti’. The Ignite Session  will

Join us for this exclusive session wherein senior leaders from the Government of India, State Government of Madhya Pradesh, USAID/India, Child Fund and IPE Global will each present their perspectives on the Mukti intervention which is aligned to making India TB-Free by 2025.

Chhavi Bhardwaj, a young and bold leader, is an IAS from Madhya Pradesh Cadre, 2008 Batch. She brings with her about 13 years of experience in civil service within various departments and ministries in Madhya Pradesh, across state and local governance systems. After completing B.Tech. in Electronics Engineering, Chhavi passed the IAS examinations in 2007. Over the years, she has held various offices as Assistant Collector (Gwalior), CEO Zila Parishad (Damoh), Commissioner-Municipal Corporation (Singrauli & Bhopal), and Collector (Dindore & Jabalpur), before joining as the Mission Director, National Health Mission, in June 2019.

A Master’s in Business Administration from London University, Neelam has been serving as ChildFund India’s Country Director and CEO for over four years; providing dynamic and strategic leadership. Prior to joining ChildFund India, Neelam led a global organization based in the UK, the Resource Alliance. Neelam worked in the UK for 15 years with major organizations such as Help-Age and Oxfam GB.

The Honorable David J. Ranz
Consul General of the United States of America in Mumbai, India

A native of New York and a career diplomat since 1992, Mr. Ranz is a member of the Senior Foreign Service, class of Minister Counselor.  Mr. Ranz previously served as Deputy Assistant Secretary of State for South Asia (India, Bangladesh, Nepal, Sri Lanka, Bhutan and Maldives) in the Bureau of South and Central Asian Affairs; and as Deputy Assistant Secretary of State for Pakistan.  Prior to that, Mr. Ranz was Director of the Office of Pakistan Affairs.  Mr. Ranz’s previous assignments include Chargé d’Affaires, a.i., Acting Deputy Chief of Mission, and Counselor for Political Affairs at the U.S. Embassy in Cairo, Egypt; and Spokesman and Counselor for Public Affairs at the U.S. Embassy in Baghdad, Iraq.  Mr. Ranz has also served in Rabat, Morocco; Jerusalem; and Karachi, Pakistan.