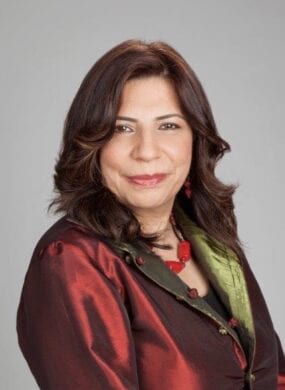 Ms. Khanna oversees the Foundation's policy, advocacy, grant-making, and partnerships in Asia. She leads The Rockefeller Foundation's efforts to form strategic collaborations that advance development in Asia, as well as the wellbeing of humanity in the region and around the world.

Ms. Khanna joined The Rockefeller Foundation in 2015. She most recently served as Director and managed one of the Foundation’s flagship initiatives in India, Smart Power for Rural Development (SPRD). In this role, she led the full range of activities, partners, and resources of the initiative to provide affordable and clean energy to over a million people in India.

Prior to joining The Rockefeller Foundation, Ms. Khanna served as Director of Youth Learning with The MasterCard Foundation, an independent, private foundation based in Toronto, Canada. There, she led the global grant-making strategy across more than 50 projects within the portfolio, and managed a budget of USD 800 million. Ms. Khanna also held multiple leadership positions with Plan International, including Country Director for Vietnam and Regional Director for East and Southern Africa, where she led overall strategic planning within the region and managed operations in 12 countries.

Ms. Khanna earned her bachelor’s degree in Sociology from Delhi University and holds a certificate from the Humanitarian Leadership Program at Harvard Business School.