Formal collaborations between the public and private sectors are now commonplace in aid and development projects. In terms of housing and infrastructure for urban settings, most countries have been subject to this mixed-type of investment for the last 30 years. Yet, the format and nature of such partnerships can incorporate various forms. In recent years, experts and academics have taken it a step further by adding one additional ‘P’ to the equation: people. Under this premise, public-private partnerships should also adopt a people-centered approach where people, represented through civil society organizations, as a way to ensure that community and social concerns are as equally important as other steps of the development process. 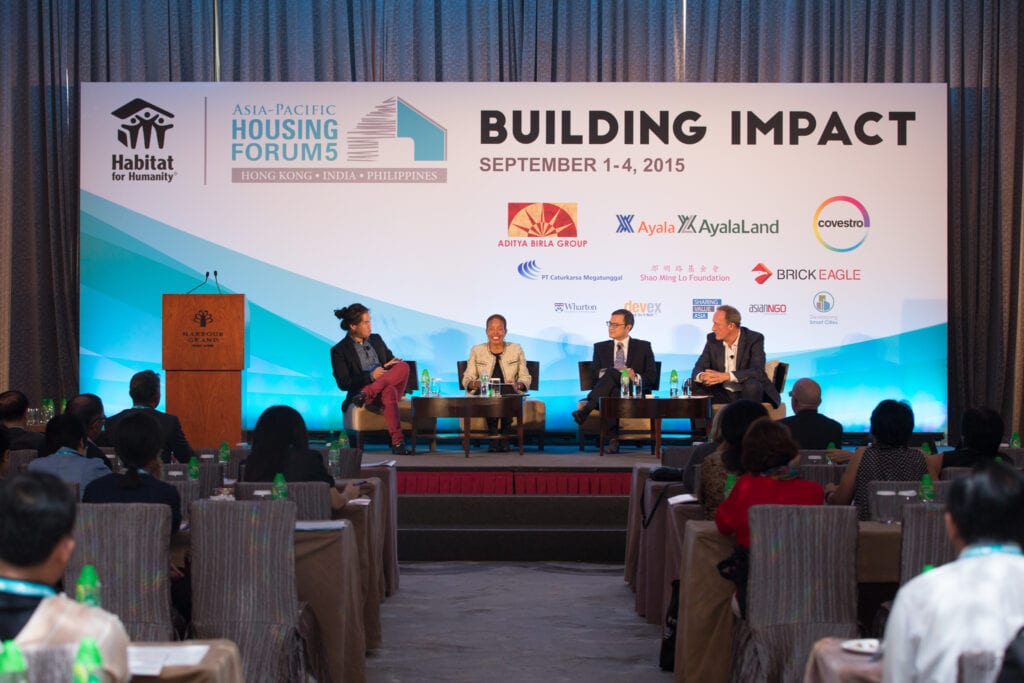 Overall, PPPs are financial and operational models that, leveraging on the different expertise from governments, corporations and civil society, can generate economic efficiencies, lower costs and extend infrastructure assets, with impact usually in the medium and long term. From a corporate perspective, organizations can benefit from the ‘shared value’ of such partnerships, allowing their core business operations to incorporate sustainable practices (while still keeping economic gain), ensuring they leave a positive print for future generations and demonstrating that their vision goes beyond market growth and profitability. Most importantly, the alliance with public entities also greatly decreases risks, especially for high-impact and high-cost projects. On the other hand, public and civil society sectors benefit from easier access to increased volumes of funds and more innovative and flexible implementation structures and decision-making processes.

Once the stakes are made clear, a fertile ground for partnerships between government, private institutions, academia and civil society can blossom. When supported by appropriate frameworks and policies, PPPs can successfully facilitate the flow of capital, technology and knowledge, while also optimizing the allocation of tasks, obligations and risks in development programs. The challenge of any partnership is to bring these diverse set of expectations together, linked by a common vision that leads to sustainable development practices.

As countries advance to implement the Sustainable Development Goals, the trend of rapid urbanization in major Asian cities presents itself through both challenges and opportunities for the achievement of SDG targets in numerous areas. Poverty reduction, improved access to water and sanitation, inclusive economic growth and development of more sustainable cities are just some of the areas where PPP partnerships can have a profound impact in the way that cities and economies grow in the coming decades.

In Asia-Pacific, where the urban poor already represent hundreds of millions of people, there are plenty of issues that must be approached through collaborative fronts: widening supply gaps in urban infrastructure and services, inadequate resources and capacity to manage local urban development, and a fragmented institutional framework. While public-private partnerships can be developed under different arrangements depending on the type of project and actors involved, both governments and private-sector partners must develop a concrete engagement strategy within its various stakeholders, such as housing departments and smaller government units to strengthen and implement city-wide urban development programs. In turn, private organizations can support operational and execution efforts, while also exploring opportunities in the provision of low-income or socialized housing. Lastly, civil society organizations are the most suited to connect local and grassroots groups and communities with the support offered through PPP partnerships. This helps build local capacity for communities and keeps them as an integral stakeholder throughout the development project’s life cycle.

Public-private partnerships can be implemented in different sectors that are part of urban life such as housing, transportation, water and sanitation, education and public health. While there is inevitably a level of self-interest in the motivation of all partners, public-private-people partnerships have proven to be a major methodology to meet infrastructure, housing and sustainable development needs, not only in Asia but across the world.

‘Development partnerships – sharing risks and rewards’ will be the topic of one of the plenary sessions at the Asia-Pacific Housing Forum, held in Hong Kong from September 4-7, 2017.

Rick is a vice president for Habitat for Humanity International, responsible for the overall success of Habitat’s affordable housing activities in dozens of countries throughout Asia and the Pacific.

Rick has been with the organization for over two decades, first joining Habitat as director of US programs where he managed the organization’s expansion to all 50 states. He came to Asia in 1993, working to develop new Habitat operations in South Korea and New Zealand. From 1995 to 2002, he supported the development of Habitat organizations and programs in East and Southeast Asia. Most recently he served as director of regional programs, providing support to individual national Habitat organizations in the region, before being appointed as vice-president 2007.

Rick graduated from the University of Massachusetts in 1983 with a degree in Mechanical Engineering. Prior to joining Habitat he spent six years as a Design Engineer with the Aircraft Engine Business Group of General Electric Corporation. Rick holds two masters degrees: one in Urban and Environmental Management from Australia’s RMIT University in Melbourne, and another in Business Administration from Eastern University, Philadelphia, Pennsylvania, USA.