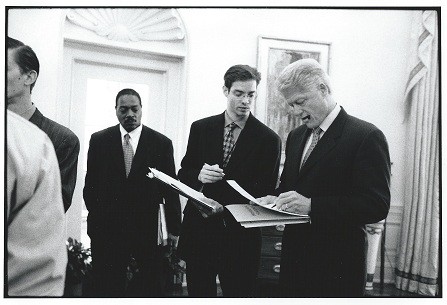 Lowell Weiss has worked in both public office in the US – as Special Assistant to President Bill Clinton – and in philanthropy for the Morino Institute and the Bill & Melinda Gates Foundation before founding his own organization, Cascade Philanthropy Advisors in 2008. Next month he will deliver a series of workshops for AVPN on the art and science of effective philanthropy. Lowell has been described by Bill Gates Senior as ‘a gift to the world of philanthropy’.In advance of his Asia workshops, AVPNews talked to him about his work with Gates, the unique perspective his experience in both the public and social sectors has given him and the role of, and challenges facing, philanthropy in an age of austerity.How and why did you get involved in philanthropy advice?I have been engaged in philanthropic advising in one form or another since 2001. My introduction to the field came after I left public service and began working with a brilliant, deeply engaged donor named Mario Morino. Mario is the co-founder and chairman of Venture Philanthropy Partners. He helped me learn about the ways that philanthropists can help non-profit leaders build high-performing organizations that achieve great impact. Later, I was offered the job of helping to build up the Gates Foundation’s DC office. Among other things, I provided analytical insights to Bill, Melinda, and other senior leaders of the foundation on potential new programme areas and I served as the staff director of an effort to determine the highest and best use of Warren Buffett’s remarkable gift.Were there any special problems associated with a gift the size of the one Warren Buffett made to the Gates Foundation?That gift was the most generous gift in the history of philanthropy. The devilishly difficult challenge is making sure it is as effective as it is generous. To do that, the foundation had to grow dramatically; it grew from about 200 to 700 employees during my time there. And organically. Gates had to find great talent very quickly and – harder still – organize and manage that talent in a way that enhances, rather than restricts, creativity, innovation and responsible risk-taking. 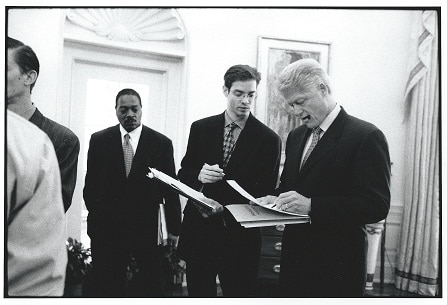 Photo by Sharon Farmer, Official White House photoYou worked for both Bill Clinton and Al Gore while they were in office. How did your political experiences influence your work in philanthropy?My time in the White House had a big influence on my work. When I left public service, I was highly motivated to join the social sector, because I perceived that the ratio of light to heat would be much higher in the social sector – that is, less energy would get burned up in the form of fighting partisan battles. The social sector has its own ‘heat’, in the form of a very inefficient capital market and other challenges. But on the whole, I’ve found that the heat-to-light ratio is a lot more favorable in the social sector.However, my experiences in both fields have shown me that the government and public policy has a role in just about every issue my clients and I care about. Good public policy is critical for addressing social and environmental challenges! So I’m glad I can share my knowledge of how political processes work with my clients as they work to engage governments at different levels to create systems-level change.Why did you set up Cascade? Had your experience suggested some critical gap in the field which you wanted to fill?I started Cascade to continue to do the work I was doing at the Gates Foundation in a structure that made it easier for me to be a great dad to my two wonderful kids, now aged 7 and 9. I get to spend the majority of every day thinking through difficult challenges of real significance to children and families around the world. And I get to help smart, generous people use their time, treasure and talent to make a genuine impact on the issues they care about most.There is a very important gap that I try hard to fill. It’s the effectiveness gap. All of my clients have experienced frustration in their giving, often because they don’t have a clear sense of what they or their grantees are accomplishing. So I work hard to help them gain clarity on what they intend to accomplish. Then I help them establish or refine giving programmes that are highly aligned with those goals. And then I help them learn along with their grantees, so that they can keep getting better and keep accomplishing more, which helps them get more personal satisfaction out of their giving.You are running a workshop for AVPN in July on the art and science of philanthropy. Without giving too much away, can you explain that idea a bit more?The science of philanthropy is the part of effective philanthropy that is dependent on the ‘head’ factors – setting clear goals, building strategies informed by the best available evidence, collecting data to learn and improve, and so on.The art is the part that derives from the heart, and I truly believe that both are equally important.Bill Gates started with a ‘head’ connection – reading data-intensive World Bank reports on morbidity and mortality in developing countries. That’s pretty dry stuff for most of us, but that’s the way he processes the world – but, the point is, that ‘head’ connection deepened to a very sincere ‘heart’ connection through travel in Africa, Asia and elsewhere. Without that heart connection, it’s very difficult to get that passion to go beyond funding the problem to actually funding the solution and sticking with it through thick and thin.

Everyone who starts out in philanthropy is going to get some black eyes. If you don’t have a heartfelt connection to an issue, you’re going to say, ‘I don’t need this’.

There are plenty of other things I could do with my money.’ Most of the problems philanthropists want to take on require that ‘stickability’, to keep going and solve the problem.How important do you think philanthropy is to the development challenges facing the world?Effective philanthropy has a huge role to play in addressing – and solving – development challenges all over the world. Governments are just not built to be innovators. By their very nature, they’re often slow and risk-averse. Philanthropy, done right, can provide vision, risk capital, creativity and perseverance that is so sorely needed for solving big challenges. I saw that frequently in my years at the Gates Foundation, especially in the realm of global health. Bill and Melinda are providing all of those things in spades in the fight to eradicate polio, develop a malaria vaccine, prevent new HIV infections, raise vaccination rates, and bring new diagnostic tools to market.There’s a trend in philanthropy towards more businesslike approaches – better measurement, more demonstrable results – and venture philanthropy plays into this. Do you see this increasing?I do. What’s driving it is that resources are very, very scarce. Donors aren’t going to have a dollar to waste on programmes that don’t work. More and more, philanthropists are going to demand some form of evidence that organizations are doing what they say they do. But I hope funders are wise enough not only to make those kinds of demands for evidence, but to support non-profits to develop the capacity to collect that evidence. What we’re seeing at the moment is a lot of demand, but not much support to meet it. What in commercial terms would be called good management – investing in organizations to develop their talent and their management systems – for some reason is disparaged in the social sector as ‘overhead’. For donors who have a strong business background, like those in venture philanthropy often have, you can make that argument that helping organizations build the capacity to be great institutions that really do meet their mission takes more than programme-level funding, just as it does in the commercial sector.Asia is a developing continent philanthropically as well as economically. Given that, do you see any particular challenges in introducing a fairly sophisticated approach like venture philanthropy?I am not an expert in any Asian culture. But I believe the core concepts of venture philanthropy are ones that can and often do resonate with many wealth holders, especially those who have started, led or invested in successful businesses. Although there are important differences between the non-profit and commercial sectors, I have found that the core concepts of venture philanthropy are common across both sectors. For example, the need to invest in organizations, as we’ve just been saying. Entrepreneurs, successful managers, and investors intuitively understand this. They know that what makes things happen is people. They know that investing in talent, whether it’s in a for-profit or nonprofit context, is smart money.What is the most important lesson you’ve learned about philanthropy?Philanthropy can do a world of good. But it can also do inadvertent harm. It is critical for philanthropists to think deeply about potential unintended consequences and to build systems for monitoring results – so they will do no harm and can do more good.